When Nollywood Tells Our Story 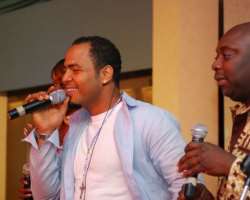 When dealing with whom you know, always apply the laws first. Pardon the fellow when the law entangles him. By so doing you would live in peace with those you know!

Each time the swashbuckling Minister of Information and Communications (read Re-branding), Mrs Dora Akunyili shares a podium with Nollywood practitioners or adventurers, she takes her time to give Nollywood a good dressing down. She cuts the picture of a stringent headmistress cautioning errant school children.

Daily Triumph Newspaper of November 2009 carried just an ounce of Minister Akunyili's peppered vitriolics against the forces aligned against her mission to rescue Nigeria's image. She blamed Nollywood for Nigeria's poor image and charged her to tell our own stories. She said the same thing few weeks into her appointment as Minister at an interactive workshop with Nollywood practitioners in Lagos. And I suspect, she says it everyday. She's after all a Minister; all they do is say things.

Had Dora Akunyili not being a Minister, she might have understood the inanity of her assertion but as I fear the cordial distance Nigerian public officials maintain with reality has a way of deodorizing the embarrassing stench of empty reason. But that is hardly surprising as it emanates from a Ministry where trite ideas are routinely granted a new lease and executed with zeal that borders on mania.

How on earth will anyone blame Nollywood for Nigeria's sorry image? Did Nollywood invent Juju or 419? Is the President of Actors Guild of Nigeria operating from Aso Rock? Pray, are Aki and Paw Paw Senate President and Vice President? Is Genevieve the Minister of Power or is Desmond Elliot the Minister of Works and Housing? Even Pete Edochie, a strong advocate of re-branding was kidnapped by a bunch of renegades the police cannot find even if they were to raise their hands in a gathering.

Minister Akunyili keeps charging Nollywood to tell our own stories, frankly, I would be very disturbed the day Nollywood begins to tell our story. The reason is that our story, quite frankly, without putting too fine a point on it, is a glorified mess.

In President's Yar Adua's Independence Day speech the dearth of concrete, measurable achievement led him to urge Nigerians to at least be grateful to still be alive. This is a government that returns to the treasury half of the year's budgetary expenditure at the end of each fiscal year because it is peopled by charlatans of the first order who are so dumb they don't even know how to spend money!

Isn't it an irony that Nigeria is on the list of countries with the highest immigration rate to other countries only rivalled by Afghanistan and Iraq countries at war? Sundays, a maze of crowd so thick you won't even recognize your mother flood churches and Fridays, normal activities are grounded because Nigerians have gone to find God. Yet God hardly factors in their thoughts and actions. Our politicians swear with the bible or Koran and it is common knowledge that they hold the key to the squandering of our hope. The clowns at the National Assembly have spent more days deciding how to amend the constitution than it took to write the damn document.

And come to think of it, how many times have the budget made provision for the Benin-Ore road and why is it still a death-trap? How come university students sat at home for four months due to a protracted strike and the education Minister's children school abroad? How come we still have a ministry of health when public officials travel abroad to treat catarrh? How come we are one of the leading oil producing nations in the world and we still import fuel? How come after almost 50 years after independence we can't even light our streets? Indeed, I'd be very worried the day Nollywood begins to tell our stories.

It is ironical that while Madam Re-branding wants Nollywood to lead the campaign to re-brand Nigeria, she is unfazed with the teething challenges confronting Nollywood. To get funding for movies is difficult even before the current global economic crises, now its impossible. The government's film fund has not left the paper it was written on. Movie pirates now sell more copies than marketers as Nigerian Copyright Commission only proclaims her tigertude on paper. In spite of this, Nollywood has done more to promote Nigeria's image than all the gaggle of nincompoops who parade themselves as leaders throughout the country.

Minister Akunyili is still fuming over a Sony advert that implied that Nigerians are scammers (our favourite past-time anyway) and some air-headed people too wanted an apology because District 9, a South African film purportedly claimed that Nigerians were cannibals and scammers. Emeka Mba's Censors board and Madam Re-branding were outraged because for the first time somebody had enough balls to tell our story.

Minister Akunyili advices Nollywood to focus on the positive things and I wonder how many positive things are we reputed for? Yes, we produce a world class literary genius in Chinua Achebe but we left him in a wheel chair just because someone felt the allocation to fix the road will sit better in his private account. We sent out our soldiers to stop other people's war (while ours rages unabated) and when they return some higher officials stole their monies and we hound them in jail when they shouted too loud. Yes, we are 150 million strong and yet we awarded the highest office in the land to a man we've all been asked to pray that he lives as a matter of national priority.

Studies suggest that behaviour is patterned after media content. At the same time media content reflects the value pattern of the society. And when it comes to the issue of values, ours is reeking like an open sewer. Greed, nepotism, ethnicity, corruption and the politics of the belly have eroded our value system. Successive governments have elevated corruption to a pedestal so high, its beginning to assume the character of state policy.

Minister Akunyili will be outraged at the level of support serious governments give their film industry. In Nollywood we have to rent even the shabby police uniforms we use! Freedom of Information bill remains a mirage stalling investigative journalism and critical research to produce historical films that can help our sorry image. When public officials wish to get their hands dirty, they call up consultants to draw up harebrained designs for the movie industry which they can't even explain if their lives depended on it.

Minister Akunyili should be grateful Nollywood is not telling our story.