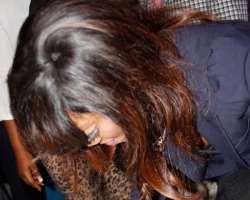 Since last week Saturday, there have been several reports that sexy singer, Tiwa Savage was arrested last week Friday night in Lagos for allegedly assaulting a police officer around Eko Hotel and Suites.

The singer was said to have taken off the cap of the police officer, who reportedly stopped her for allegedly breaking a traffic law. She was reportedly whisked away to a police station in Victoria Island but was later released by the police.

Reacting to the development, Tiwa Savage's husband and manager, Tunji Balogun, well known as Tee Billz, told Nollywoodgists.com when contacted on the issue that the rumour is false and has no iota of truth in it.

“My brother, I am also just getting to hear about this rumour, it is not true. I don't know where they got such information from,” Tee Billz told Nollywoodgists.com.

“I don't know when exactly they said such incident happened but Tiwa had four shows that night (the incident was said to have occurred), and she was with us all through,” Tee Billz said.