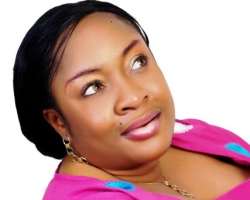 Actress Foluke Daramola and her hubby, Kayode Salako had a quiet wedding celebration as they agreed and it was a time for Foluke to talk about Kayode and why she would not be leaving him for a long time.

She said "I have a marriage principle; the only reason I will leave my marriage is for physical abuse. I won't compromise it again. It makes someone to be dead spiritually because you lose your self-esteem and die inwardly. I can deal with infidelity but not physical abuse because I might not live to tell the story.”

And added "I have had different experiences; I have been in a marriage once, I was abused in it, I was deflowered by rapists.I had a younger brother and I never got to know a father figure in my life. As I grew up, my environment exposed me to dangers and it was why I was deflowered at an early stage."