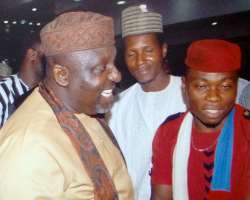 His Excellency, Governor Of Imo State Shakes Comrade Godstime C. Samuel Congratulating Him On His New Appointment As The Special Assistant To The Governor On Students Affairs Yesterday In Imo Govt. House
Listen to article

Imo Governor made this appointment yesterday at Sam Mbakwe Exco Chambers while receiving the Leadership of National Youths Assembly of Nigeria, NYAN, and its NorthernChapter led by Ambassador Kassim Mohammed Kassim, Youth Ambassador of Nassarawa State and Speaker of NYAN.

Comrd. Godstime Samuel, the Youth Ambassador of Imo State was the Supervisory Chairman of the Student Union Government of Institute of Management and Technology between 2009 and 2010. He was also the National Vice President, National Association Polytechnic Students between 2010 and 2011. Also 2011, he was elected the Speaker, National Parliament of Igbo Students.

Upon his graduation in 2011, he was appointed the Youth Ambassador of Imo State. His activities have in no little way affected Imo Students positively. While he has been found worthy for the latest appointment, he is the National Coordinator APC Students Supporters Group and the National Deputy Speaker, National Youth Assembly of Nigeria, the Umbrella body housing all the Youths Ambassadors of all the States of Federation.