POLICE AND CITIZEN: MY AFRICAN EXPERIENCE. 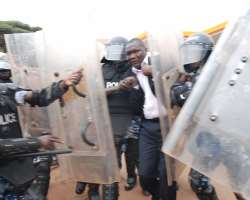 Abubakar Sematimba
Police is a government organ that has been mandated by the constitution of a particular nation like Uganda to enforce law and order, but this can only be possible when there is a collective responsibility of the police its self, the Government and the Citizens.

Police must be proactive and not reactive as the situation is in many parts of Africa, proactive in a sense that, it has the mandate to react to any situation or incident that can occur in the society, and that is being pro active, it's not only after an incident has happened.

PARTISAN and XENOPHOBIC:
Police in Africa is partisan and xenophobic, it only serves the interests of a particular movement, group or individual, it is also used by some Governments to suppress oppositions; this can be evidenced in so many African countries, in Southern Sudan for example a friend narrated to me how police was pursuing them for no other reason other than being foreigners.

In Zambia police could not leave Kibolya Mosque near the capital Lusaka, looking for foreigners inside the mosque, in Kenya being a foreigner is a crime, the same case in South Africa, a Mozambican taxi driver Mido Macin was tied on a car and pulled to death by Devyton police officers. ,

Corruption:
No doubt Police is a very corrupt institution in so many countries in the world and when it comes to Africa it is worse, from Cape Town to Cairo, except in Rwanda where President Kagame's government does not tolerate any kind of corruption.

Rwanda's Police is highly ranked in African, but else where in Africa you have to pay some thing 'kintu kidogo' bribe, to get helped; for example here in Uganda, you can corrupt a police officer to do crime or conspire with him directly or indirectly.

At kyengera a kampala outskirt, police officers connived with criminals to rob a supermarket, I have also witnessed women being mishandled by police in some Afro Arab nations.

In South Africa for example, police chief Gen Bheki Cele, was fired by president Zuma after being accused of corruption, and implicated in unlawful property deals. I ironically Gen Cele's predecessor and former Interpol Boss Jack Serebe was also jailed for corruption.

Oscar Pretorius the South African Para-Olympian case of shooting his girl friend was almost jeopardized because of the police character, it is alleged that the police intentionally removed bullet riddled door of the suspect to conceal evidence that could implicate the athlete.

However, it must be noted that their some positive situations that have to be attributed to African police, they do sacrifice a lot working under dangerous conditions yet they earn less, police have few head gears , welfare is almost zero , poor housing and almost no facilitation at work.

What the Police earn is peanuts to cater for their families demands however; this can not be the reason to justify any wrong doing.

police work is so stressful, and this has led to so many cases of murder and suicide with in the force, for example in South Africa, a police officer is not supposed to shoot a criminal, you are told to either run and catch him or leave him, other wise you will be prosecuted as an individual not as a police institution for shooting at a 'innocent' person.

To sum it up, what is happening in police institution is one of the many indicators that shows how the entire African values have gone to the dogs, therefore fingers should not only be pointed at police, but also other institutions like judiciary, prisons and parliaments, it is rumored that some officials in Uganda prisons Department connived with criminals and kept 'suspects' in the prison without going through the proper channels, the case was land related.

The mess in Africa's parliaments also can not go un noticed, for example in Uganda's Parliament, bills after bills have been passed and amended, but there is unrealistic colonial laws like the sedition law and others that have never been discussed about.