Kim, Kanye are moving up their wedding date 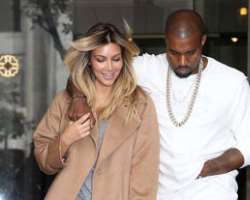 
Another day, another Kimye wedding development. A little more than a week after news broke that Kim Kardashian and Kanye West will be getting married in a televised wedding special in Paris in June (reportedly on E!‘s dime, no less), Us Weekly is now reporting that the pair are actually moving up their wedding date to May. Another sliver of info about this highly-produced wedding extravaganza: North, Kim and Kanye’s adorable eight-month-old daughter, will apparently have a “larger role” in the wedding. (Is this like a Blue-Ivy-on-Beyonce’s-new-album type of larger role, or decked-out flower girl sort of larger role? We’re not sure.)

An insider is also proposing that there will be a tonne of events leading up to the big day (are you surprised?). With recent news that Kanye will be taking the reins in wedding planning, we’re sure that this “festival”-like wedding weekend (as a source aptly dubbed it) will be nothing short of over-the-top. We can only imagine that there will be plenty of Givenchy looks to go around, and that a camera will be following the aisle-bound pair through every step. It may not be Versailles, but we have a feeling the now-May bride and groom will ensure it’ll be as royal as an American wedding can get (Brides).