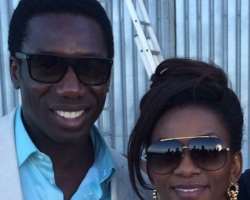 Born October 1, 1962, Hakeem Kae-Kazim is a British Nigerian actor British who is best known for playing the character, of Georges Rutangada in the 2004 blockbuster movie, Hotel Rwanda.

He also starred as Colonel Iké Dubaku in season 7 of 24 and the TV film tie-in 24: Redemption.

Coming to Nollywood, he's starred in movies like Last Flight To Abuja and Half Of A Yellow Sun. Hakeem Kae Kzim talks about growing up, career, family and other issues.

Well it's great, feels normal. Nothing really specially anyway and as you know, I am a Nigerian and I bear our name. But I don't think I missed anything actually because until the last two years I always spent my Christmas here in Nigeria, I love local dishes, I love our traditional wears too.

So you come to see your family during Christmas?

How did acting start for you?

I started off studying drama and from there I was doing a lot of stage plays and theater in the UK. From the UK, I moved to South Africa and did a lot of films and commercials on South African Television. From South Africa, I moved to the US where I am now, still doing what I have always loved to do-acting.

You've taken part in a lot of blockbuster movies like Hotel Rwander, 24, which one of the movies was your big break?

Each one of them is unique is their own way. '24′ was quite awesome and then, 'Hotel Rwanda' which I was very glad to be part of. Then I have done 'X-Men Origins: Wolverine' and the 'Pirates of the Caribbean'.

I'm sure it wasn't all rosy. What were the challenges you faced as an African breaking into Hollywood?

Yes it wasn't all sweet at the beginning because there were times when I was broke and was hard to put food on my table. Getting movie roles was also a challenge because here in Nigeria you're sure to keep getting scripts but it's not like that in the UK, if you get a movie role today, you might not get another until like 2-3 months time. But all in all, it's been good experiences.

You came into Nigeria few days ago and you already shot the Etisalat advert with Genevieve Nanji. What is it like being on set with her?

Yeah, Genevieve is a sweet girl and she's quite good at whatever she does. So, it was awesome working with her.

If she's that good, do you think she stands a chance getting into Hollywood?

It depends on the kind of opportunity that comes and way and how prepared she is to grab it. If she gets a good and international standard movie role and she rises up to the expectation then, she'll definitely be recognised.

What other reason brought you to Nigeria?

Aside the Etisalat advert, I'm also working on partnering with some Nollywood movie directors on how to raise the standard of Nollywood movies to meet international taste. So I'm working on setting up a movie academy where our people can be trained.

So you're not planning to star in any Nollywood movie soon?

Why, are our scripts not good enough for you?

Nollywood is still growing and is yet to meet international standard in terms of directing and production. But there are few Nollywood directors who have my kind of mind set and I've worked with them in the past. I've worked with the likes of Tunde Babalola in Last Flight To Abuja produced in the UK and he's a great guy with a great mind. I also acted in Half Of A Yellow Sun. So if I get more people like him with good scripts, why not? It's time we start doing movies that tell our stories and history. We don't have to wait for others to tell our story for us because they'll end up telling it wrongly. We have the likes of great people like Sango, Nnamdi Azikiwe, Awolowo and others- we need to do historical movies like that.

Actors are always moving from one place to another. How do you make out time for your family?

I have a very understanding wife and three lovely kids. She understands the kind of job I do and helps out most of the time.

Yes she does because I'm away most of the time. She's from South Africa and that's where I met her. We got married and I took her to the US. Funny enough I now shoot more in South Africa and my last kid is not even two yet. But I get to see her and speak with her on Skype whenever I'm not home.

I'm sure you'd have loads of female fans. How do you cope with them?

Yes I have loads of them but there's time for everything. I have spaces for my friends, family and fans in my heart so I don't let anyone of them interfere with the other. I always let my female fans know that I'm married and so, I don't bring them closer than necessary.

Have you had any embarrassing moment with a female fan before?

Yes, there was one when I got into a train and a lady saw me. She started screaming and shouting my name, she almost passed out letting everyone know I was Hakeem and acted in so so and so movie. It was quite embarrassing.