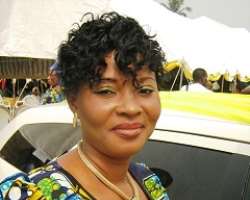 Nollywood actress Moji Olaiya who served as the brand Ambassador for the last concluded Ekiti State Festival , Ekiti Fest' can now have a rest of mind, her estrange husband, Bayo Okesola who has being begging her to move back to their matrimonial home is rumoured to be seen with a lady he may end up marrying, it was reported that Moji abandoned him because she was often assaulted by him and also, she claimed he was lazy.

Moji narrated why she gave him the exit door to follow “One of the reasons I broke up with my husband was because of domestic violence, but I don't want to go into details of the whole mess. I am not going to hold brief for anybody. If you call two or three people, who knew about our relationship, they will confirm what I am saying. Some men believe they can show their ego by beating their wives,”

Bayo is reported to be doing a hide and seek game with a lady and it is said that he may end up marrying her if things work out right. According to sources, “ Moji reportedly endured series of domestic abuse as part of efforts not to go down history as one of many public figures with failed marriages- until her hubby reportedly fathered a child out of wedlock and she moved out of her matrimonial into a rented apartment inside Omole Phase 2 recently.”