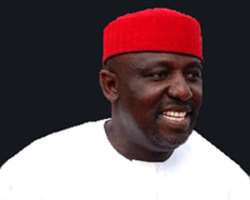 
Governor Rochas Okorocha's posters, indicating his interest to run for the presidency in the 2015 general elections, has flooded Owerri and other major cities in the state.

Our Correspondent, who moved round the Owerri Capital Territory Tuesday, noticed the pasting of several posters at strategic points, including the Government House.

Apart from Okorocha's photograph, the posters equally included his presidential ambition for the February 14, 2015, presidential poll.

As at the time of going to press, no campaign organization, agency of the state government claimed responsibility for the flooding of posters in the state.

When contacted for comment, the Governor's Senior Special Assistant, SSA, on Media, Mr. Samuel Onwuemeodo, confirmed that Okorocha was interested in running for the presidency but has not declared his intentions openly.

'It is not a secret that Governor Rochas Okorocha is interested in running for the presidency. It is however true that he has not openly declared this intention to run for the top national job in next year's general election', Onwuemeodo said.

According to the SSA, Governor Okorocha has not commissioned anybody or group to print and paste the posters, adding that there had been series of meetings about the matter in some parts of the federation.

'The Governor has not commissioned anybody or group to act its campaign outfit. I however know that a lo of people have been clamouring for this and meetings have been going on in many states of the federation over this matter', the SSA said.

Vanguard recalls that only last week, Okorocha took a swipe at the President of Ohaneze Ndigbo for daring to decree that no Igbo man should vie for the presidency against the incumbent, Dr. Goodluck Jonathan. Vanguard