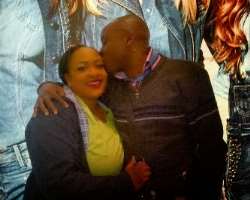 The story of Foluke Daramola getting married to Kayode Salako has been a controversial one especially after Bukola Fasuyi claimed that Foluke had used juju to charm Kayode, months have passed and the couple are enjoying their reunion, Valentine is almost here and they have decided to spend it in one of the five star hotels in Lagos because it is Foluke's birthday too.

Kayode said : “I will be celebrating Valentine on February 14 to express my deep affection in its originality, especially to someone who deserves it more in my life: my darling and bosom wife and soul mate, Foluke Daramola-Salako. She is my Valentine for February 14 and that is where the world should expect me to share it and express it. I try to celebrate it in such a way that, at the end of the day, someone special will feel deeply loved and vice versa.

The best Valentine'gift he has ever received from anyone is from Foluke, who he claimed gave him her heart and her life to manage, for Foluke, she is the luckiest, hear what she has to tell us about her Valentine's Day.

“Every Valentine's day always coincides with my birthday. Now, it also coincides with my wedding anniversary, so myself and my hubby would be going to one of the 5-star hotels in Lagos on the 14th and 15th. We would also be having a small anniversary and birthday party. But before then, on the 13th, we would be walking against rape in Nigeria and we would be taking food and other relief materials to victims of rape in my foundation (AARA).