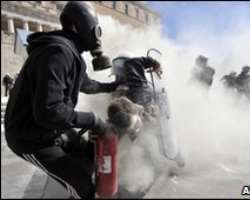 Greece has been convulsed by strikes and protests

The EU is poised to reach agreement on a potential multi-billion euro bail-out for Greece after weeks of crisis, senior officials have told the BBC.

They say the rescue package would be available if Greece asked for assistance to finance its huge deficit.

Eurozone ministers are expected to finalise a proposal setting out a range of options as early as Monday.

Greece has not requested help so far. The EU says no deal has been agreed but technical work is continuing.

It needs to raise about 20bn euros ($27bn) on bond markets to refinance debt maturing in April and May.

Its deficit is more than four times higher than eurozone rules allow, and it is trying to reduce it with austerity measures that have provoked public anger. The crisis has also undermined the euro.

German opposition
The BBC's Gavin Hewitt in Brussels says the hope is that the proposed deal will be there as a last resort, and the funding will not actually be needed.

Germany and France would be the main backers, with no contribution from Britain and other non-euro countries, our correspondent adds.

European media reports say options being considered include the provision of loans to Greece and a bond issue guaranteed by eurozone countries.

Officiald are quoted as saying the the aid could amount to 25bn euros.

The deal would have to be constructed to get around rules governing the euro currency which prohibit a bail-out for a country on the brink of insolvency.

And any potential rescue package will be hugely controversial in Germany where there is strong opposition to helping Greece, our correspondent adds.

It would also have to avoid the possibility of a challenge from Germany's supreme court.

On Saturday, European Commission spokesman Jonathan Todd said: “The commission stands ready to act if necessary. Technical work is ongoing and has not yet been concluded. All the rest is speculation.”

European Union rules state that no nation in the euro bloc should have an annual budget deficit which is higher than 3% of its gross domestic product.

Its long-term deficit-cutting plan aims to cut the budget shortfall drastically, to less than 3% by 2012.

Concerns about its giant debts currently make it more expensive for Greece to borrow money compared to most other European nations.