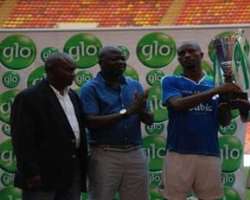 
Enyimba International of Aba completed a hat trick of wins at the Pre Season Super Four tournament in Abuja Tuesday with a 1-0 victory over Kano Pillars, to emerge the champions of the competition.

The Aba millionaires scored six goals and conceded none in the three matches played, to confirm their position as the best team currently in the land.

The victory meant that Enyimba has now won three trophies on the trot, following its earlier victories in the Federation Cup and the Super Cup.

Enyimba also recorded a second straight victory over Kano Pillars. Sibi Gwar gave Enyimba the victory with a headed goal which came in the 76th minute.