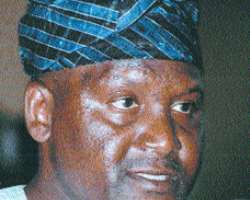 Court sacks Dangote as NSE boss
Saturday, March 13, 2010
Dangote
The Federal High Court in Lagos, has nullified the election of Alhaji Aliko Dangote as President of the Nigerian Stock Exchange (NSE). Dangote, business mogul and chairman of the Dangote Group was elected as the president of NSE in August last year. But in a reaction after the verdict was handed down, his counsel said he will appeal against the ruling.

Trial judge in the matter, Justice Lambo Akanbi, ruling on an application by some shareholders of African Petroleum Plc, who had sought to set aside Dangote's election as NSE president, on the ground that the said election was held in clear disregard of an order of court, after reviewing the facts of the matte, said, 'it is the case of the applicants that this court in the enrolled order of April 8. 2009 granted an interim order, when it ordered parties to maintain the status quo, pending the hearing and determination of both the interlocutory application and the preliminary objection.

Condemning the conduct of NSE and Security and Exchange Commission, SEC, the court said: 'The conduct of all officials of the NSE and SEC, who organised and/or participated in the purported election of Dangote is reprehensible and highly condemnable. They perhaps look at the court and think that it can only bark but cannot bite. This court will make them see that our teeth are not only sharp, they can be poisonous when they choose to bite. The court will not allow them to treat the court orders as useless by refusing to obey them, lest anarchy may set in.'

The court also noted that: 'The government should also look inward for a way to sanction, domestically, any government functionaries found in disobedience of court's order. This is the only way the 'big boys' and those claiming to be close to power and who are laws unto themselves can be checkmated so that the genuine desire of the present administration to enthrone true and genuine democracy can be attained.

'The integrity of the court is at stake here in this application. There is a direct affront on the authority of the court. The court must therefore rise to make the lawless elements in the 13th and 14th defendants see how sharper it is than a serpent tooth to have disobedient and lawless executives in government establishments.

'I will bite them with my sharp teeth by sustaining the application of learned counsel for the applicants with the following order: An order is hereby made nullifying, vacating and setting aside all steps taken by NSE in purporting to elect Dangote as the President of the Nigerian Stock Exchange', the court held.

The court further said, 'like every judicial official, I feel troubled and tremble each time I see any Chief Executive of a government agency or establishment and their minions spurn and treat the order of court with levity, leaving the impression that since the courts have neither the police nor guns nor the army to enforce whatever orders they make, they should treat such orders with impunity. I see the act of the officials and executive, who operate NSE and SEC as a subtle strive and exploration by devious and dubious way to circumvent and render nugatory, the true intention of the order of the court to maintain status quo.'