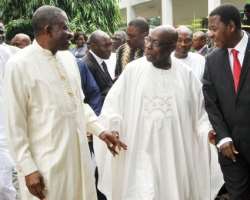 
The Presidency may have put on hold its earlier directive to  the State Security Service  to investigate the weighty allegations contained in the controversial letter  written by  former  president Olusegun Obasanjo to  President Goodluck Jonathan in December last year.

Saturday PUNCH learnt that the Presidency decided to halt the investigation of  the issues raised in the former president's  letter in order to amicably settle the rift between President Jonathan  and his political benefactor.

It was learnt that notable political leaders in the country were already engrossed in moves to bring the President and Obasanjo together.

It was further gathered that security operatives were directed   to stop the investigation as a result of the ongoing efforts in high political circles to broker a truce between the two political figures.

A  source close to the Presidency, who craved anonymity because he was not authorised to speak on behalf of the President, told one of our correspondents in Abuja on Thursday  that the President was more interested in settling his differences with Obasanjo than carrying out the investigation that could deepen the crisis.

'The President was the one that gave the directive but I think another counter directive is in force now; they might not go into investigating all those things in the letter. I think they are making efforts to settle this matter.

'Political elders are intervening in it so the President asked them to stay action on it; so, for now there is nothing on it.

'There is the need to take a look at the political implication of the course of action. Besides, the President believes that his differences with Obasanjo are not irreconcilable,' the source said.

Security operatives had earlier contacted   the former president  over the controversial letter two weeks ago in response to an earlier directive by President Goodluck Jonathan.

A security source told one of our correspondents   that the SSS wrote Obasanjo following a presidential directive to security operatives to investigate the grave issues raised by the former president in his letter to the President late last year.

It was learnt that the SSS wrote to notify Obasanjo of the impending investigation.

Obasanjo had in an 18-page letter to the President, accused him, among other things, of not honouring his words that he would not run in 2015, and taking actions calculated at destroying Nigeria.

In the letter dated December 2, 2013 and titled, 'Before it is too late', Obasanjo accused the President of pursuing 'selfish personal and political interests' based on advice from his 'self-centred aides.'

He also alleged that the President had failed to deliver on his promises to Nigerians and to curb insurgency and corruption in the country.

Obasanjo also alleged that the President had put 1,000 politicians on a watch list and was training snipers.

'Nigeria is bleeding and the haemorrhage must be stopped,' an obviously angry Obasanjo had lamented. He went ahead to declare that 'Jonathan had betrayed God and Nigerians,' who voted him into power.

In his response, Jonathan described the former president's letter as a threat to national security.

The source added that the agency wrote Obasanjo on the week he wrote the then Chairman of the PDP, Alhaji Bamanga Tukur, to announce his decision to withdraw from the activities of the PDP at the national and regional levels.

The source said, 'Obasanjo ought to have been summoned, but we have also been instructed to put investigation on hold for a possible peaceful resolution of the issues at stake.''

The source also said that the issue of the SSS inviting Obasanjo was not likely as 'they couldn't have done so' now that efforts were being made to settle the whole problem.

The source added that Obasanjo had been out of the country since last week, noting that he was expected back into the country within the week.

When contacted on Thursday, SSS Deputy Director, Public Relations, Marilyn Ogar, pleaded for time to find out the status of the probe. 'I will find out and get back to you,' the SSS spokesperson said.

But attempts to get Ogar's reaction on Friday did not yield fruits as she neither pick her calls nor respond to text messages sent to her phone.

The police however claimed that they were not involved in the probe of the allegations made by former president Obasanjo.

A senior police officer confided in one of our correspondents that the police did not have record of investigation of the allegations made by Obasanjo.

The officer described the issues as political which he said would be resolved by the parties concerned. He added adding that the Force would not be involved in political issues.

In previous attempts to confirm the status of the probe with the Senior Special Assistant to the President on Media, Dr. Reuben Abati, he had always said he would not comment on alleged reversal of any directive that was officially issued by the President.

But the National Publicity Secretary of the PDP, Mr. Olisah Metuh, has said  that the new National Chairman of the party, Alhaji Adamu Mu'azu, is likely to  meet former president Obasanjo as he commences efforts to woo aggrieved PDP members to the party next week.

Metuh said that the new chairman of the party would unveil his agenda for reconciliation in the party with effect from next week.

He said that Mu'azu placed emphasis on the issue of reconciliation when he hosted the Governor of Jigawa State, Alhaji Sule Lamido, in Abuja.

He said that Mu'azu's agenda for reconciliation also included how to get the former president to participate in the party's activities.

Metuh said, 'The National Chairman is unveiling his agenda next week, but he has already said that the issue of reconciliation is paramount and very important.

'He stated this when he received the Governor of Jigawa State and he said categorically that he would try and bring the people that left.

'And the National Chairman has enormous, complete respect for our former President and our former Chairman, Board of Trustees, (Chief Olusegun Obasanjo) and I am sure that he would unveil his agenda and the way that he would engage him in the coming weeks.

'He is unveiling his agenda for reconciliation and everything from next week, and would include the process of engaging the former President to ensure that he remains involved in the activities of the party, but let us wait for the national chairman to unveil his agenda from next week; from next week, he would start making policy statements on it.' Punch