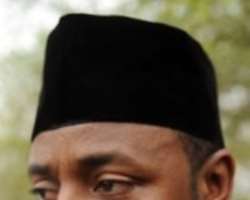 
The Supreme Court on Friday ordered Mohammed Abacha, son of late military head of state, Sani Abacha, to return to the High Court to face trial for receiving stolen money.

In a unanimous judgment Friday, a five-man panel of Justices of the apex court, held that Mohammed has a criminal case to answer regarding the 123-count charge that was earlier preferred against him by the Federal Government.

Specifically, the charge pending against him before an Abuja High Court borders on criminal conspiracy, breach of public trust, receiving and helping to starch stolen funds abroad.

By that ruling, the apex court upheld the April 18, 2005 judgment of the Court of Appeal, that looted funds by Sani Abacha be returned to the Federal Government.

Mohammed Abacha had approached the apex court, seeking to upturn the decision of the Court of Appeal which mandated the Federal Government to recover all alleged funds looted by the late head of state.

It is recalled that the Federal Government had slammed a 123-count charge suit bordering on conspiracy, receiving of stolen funds, among others, on Mohammed before an Abuja High Court.

Delivering judgement at the apex court, Justice Oluwakayode Ariwoola held that Mohammed should return to the trial court to take his plea, and possibly plead a no case submission if he so wished.

The court further held that 'if the late Sani Abacha were to be alive today and has left office, he would be liable to prosecution'.

It further held that the appellant was charged with offences against the state, adding that forfeiture order was just a punishment which could not earn him indemnity against trial.

'Appellant's father is not the one on trial and his immunity cannot extend beyond his stay in office,' Justice Ariwoola stated.

'The late Abacha is not on trial. Therefore, the appellant should go and face his trial, and he cannot enjoy the immunity of the father. The April 18, 2005 judgement of the Court of Appeal is hereby upheld. The appeal is hereby dismissed as unmeritorious and vexatious,' he added.

Before taking his plea at the trial court, Mohammed had approached the Court of Appeal contesting the legality of his trial on the grounds that he had complied with the provisions of Forfeiture of Assets (Certain Persons) Decree No. 53 of 1999.

He had told the court through his counsel, Joseph Daudu (SAN), that in so far as he complied with the provisions of the said decree, no criminal or civil suit could be instituted against him.

But in its judgment, the appellate court resolved the appeal in favour of the Federal Government, saying that there was nothing in the provision of Decree No. 53 of 1999 which inhibited the Abuja High Court from exercising its judicial power to try Abacha.

Justice Amina Augie, then in the lead judgment, also held that the said decree did not resolve any criminal issues sought to be determined in the High Court of Abuja.

The court held further that the said Decree No. 53 did not confer any immunity on Mohammed Abacha.