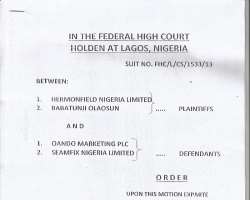 In what appears as an unthinkable and unprecedented action by a responsible corporation seeking international relevance, Oando Marketing Plc, a subsidiary of Oando Plc owned by the "controversial" businessman Mr. Wale Tinubu dared the jurisdiction of the Federal High Court, by refusing to be served a court order (copy attached) by one of the most senior court bailiff , Mr. Abba, today at their new headquarters at 8, Kayode Street, Apapa.

Oando Marketing Plc had approached an IT Service provider, known as Hermonfield Nigeria Ltd., sometimes in 2011 to procure their locally developed robust ERP solution known as Order to Delivery (O2D). The solution amongst other things automates the process of Manually placing order for petroleum products to the point of delivering the product to the buyer. Nigerian Copyright Commission and Trademark and Patent office were notified and. both bodies issued certificates of registration to Hermonfield Nigeria Limited as the owner.

While being mindful of this, Oando Marketing plc, through Mr. Yomi Awobokun, the then COO (now CEO) entered into a Non Disclosure Agreement with Hermonfield and the two companies began sharing trade secrets to facilitate the issuance of Software licence and see he possibility of customising some modules, including the "look and feel" of the portal interfaces. This communication between the 2 companies continued for about a year and suddenly, Oando Marketing Plc stopped communication. All efforts to reach them for an explanation was rebuffed and finally in January 27, 2012, the CEO Hermonfield, Mr. Tunji Olaosun, received a mail, from Oando through one Seyi Fowora, telling Hermonfield that they, "Oando" will get back to them.

According to Mr. Tunji Olaosun, the next thing they discovered was that another 3rd party company, called Seamfix Nigeria Ltd, allegedly belonging to the cousin of Oando Deputy Group Managing Director, Mr. Mofe Boyo had been handed over all the business document and instructed to replicate the solution for them and subsequently issued them with a software licence. Seamfix did their bid and even went as far as publishing the work on their website as their trophy!

Hermonfield ghen approached the Federal Court and sought an Anton Piller injunction to search and ultimately seize infringing items. However, when the sheriff of the court, Mr. Abba in company of the plaintiffs lawyers led by the Managing Partner of an Intellectual Property law guru, G.O Shodipo Chambers, Mr. Femi Fajolu and the policemen attached for their protection reached Oando Marketing Plc, the security at he gate were ordered to lock the bailiff inside their compound and refused to collect the court order.

Checks revealed that while the gates were locked attempts were made to call the highest echoleon of the Nigerian Police to convince them to withdraw the bailiffs protection, while one of the Oando personnel at the scene dismissed the likelihood of anything happening to the company as a result of this court disobedience. She was heard boasting over the phone that Oando Marketing remains the biggest oil marketing and their bosses were masters at circumventing the law, as they succeeded with oil subsidy. She further stated that there is no judiciary in the world that does not have its on price.

Meanwhile, Seamfix cooperated with the court order and released all documents relating to this IT solution as given to them by Oando Marketing Plc.

Asked what the next line of action is, Mr. Fajolu satated that names and pictures of Oando employee that prevented the bailiff from serving the order were taken and a co temot action will be filed soon.

Meanwhile, the case will be coming up for hearing later today before Hon. Justice Yunusa of the Federal High Court.