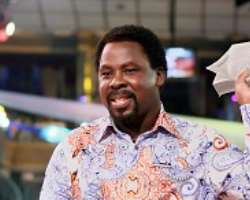 According to video evidence, the resignation of beleaguered politician and chair of Nigeria's ruling People's Democratic Party (PDP) Bamanga Tukur on Wednesday, had been predicted weeks earlier by Nigeria's Prophet T.B. Joshua of the Synagogue, Church of All Nations (SCOAN).

The Lagos-based televangelist prophesied on New Year's Eve during the church's crossover church service broadcast live via his television station Emmanuel TV that Tukur would go.

Addressing his congregation, T.B. Joshua prophesied that many mighty people would fall in 2014, a year he termed one of 'crossing the bridge'. He went on to specifically mention Tukur by name. “At last, the PDP will pay any price to unite,” Joshua said. “I don't know the price they will pay but this is what God showed me. The chairman Tukur will leave.”

Though he did not say how he would leave, it was clear that the embattled politician was heading for a disastrous fall-out with the hierarchy that would kick him out of his political pedestal.

News broke on Wednesday that the Chairman was forced to step down following a brief meeting with President Goodluck Jonathan. Press reports say Tukur had been resolute to hold on to his position until he was told that the national executive council and the national working committee of the party were read to cast a 'vote of no-confidence on Thursday January 16, 2014 against him.'

“To avert the vote of no confidence, Bamanga Tukur hurried a resignation letter – and dated his resignation for January 15, 2014 – after the Muslim holiday,” said various online publications.Read It HERE

The PDP has for over three years now been rocked with internal fights that has seen senior party officials including senators, resign. This was also predicted by the pastor who in 2010 and 2011 predicted that a new party would emerge to challenge the ruling party. He also insinuated that the wrangle that would grip the PDP had potential to bring the giant party to its knees.

T.B. Joshua is credited for predicting major world events including the deaths of American Pop star Michael Jackson and former Malawi president Bingu wa Mutharika. He is also on record to have prophesied the terrorist attack during the Bosthon Marathon in US last year.