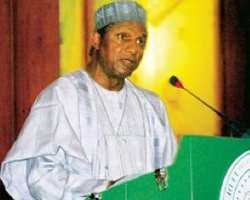 In this country, Press Freedom has been a major debate. Who knows whether it will be entrenched into the yet-to-be amended constitution? On television, radio, in periodicals and even in conversations, people are unanimous in their resolve to allow Press Freedom to prevail as a vital tool for the entrenchment of genuine democracy, probity and accountability in governance.

To some people especially those parading the corridors of power, the Freedom being sought for the Press are mistaken as exclusive privilege for journalists. Thus, such people find it difficult to see the reason why the Press should be accorded freedom in our society. We all know that freedom of Nigerian Press is not guaranteed by any formal document except the constitutional provision that task the fourth estate of the realm to defend accountability in governance. But the tools needed by the press to provide veritable space for the press to function are daily hoarded by the ruling class.

If there is consensus that no single individual possesses the answer to all public questions, the corollary then, is that if no one has all the answers, as many people as possible should be allowed their say on topics of national interest, the press must be given the opportunity to have access to information and provide such to the general public.

Moreover, individuals must be allowed to access information freely, so that accountability can be really be deepened. This is important because at some point the press, depending on ownership and editorial interest can be a fetter to access to information even if public information is made available. Furthermore, press freedom will be worthless if socio-economic rights of the citizens are not guaranteed. There cannot be interest in governance, and in extension probity and accountability, if the populace is poor.

However, Nigerian government start to fret as soon as Press Freedom is passed into the constitution because it is an open secret that majority of Nigerian politicians got to power through crooked means. Furthermore, the corrupt capitalist system that they defend cannot allow them to freely give these rights to the people. This places enormous task on the journalists, working people, professional associations and civil society to mount serious pressure on the national assembly to concede to this simple democratic right of the people. This however should not blindfold us into opposing several atrocious laws to be passed in the name of constitution amendment.