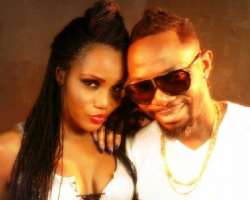 If a picture posted on the Instagram page of controversial gospel music artiste, Maheeda is anything to go by, it means she has dragged OJB Jezreel into her new music video.

Maheeda has been in the news recently, having been posting unclad pictures of herself on the internet, which have been generating several harsh criticisms. She has also not bothered about what many people have been saying about her, claiming her family is solidly behind her actions.

OJB recently returned to Nigeria after a successful surgery in India. He was treated for kidney related ailment.

As gathered, OJB will make a cameo appearance on the said music video. It is uncertain what Nigerians would say about OJB's presence in Maheea's music video, having in mind that he should be recuperating from the surgery.