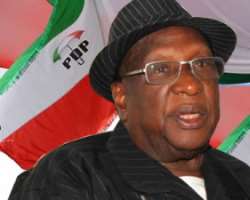 
The National Chairman of Peoples Democratic Party, Mr. Bamanga Tukur, has told former President Olusegun Obasanjo that his estranged kinsman, Buruji Kashamu, enjoys the party support and backing because of the role Kashamu played in strengthening the PDP in the South-West.

Tukur gave the explanation in his reply to Obasanjo's letter dated January 7, 2014 to the party chairman.

In his letter, a copy of which was sent to President Goodluck Jonathan as the national leader of the party, Obasanjo accused the PDP of negating the principles of morality, decency and discipline in its decisions, especially as they affected the South West.

The letter which was obtained by our Ogun State correspondent on Saturday read, 'While I believe that a good and truly national political party must be a microcosm of the nation in its membership, made up of all sorts of characters from near-saints to near-satan, I also believe that on no account should a known habitual criminal that is wanted abroad to face criminal charges levelled against him be extolled as a political leader in a respectable and wholesome nation-building political party.

'Kashamu Buruji has been so extolled in PDP in South-West geo-political zone, which I personally find unsavoury. Politics played by any national political party must have morality, decency, discipline, principles and leadership examples as cardinal practices of the party. I have attached here recent documents that clearly indicate that your extolled PDP Zonal Leader in the South-West zone of Nigeria and an indigene of Ogun State is, to say the least, not a credit to the party as a member, let alone being a zonal leader.

'Since I stick in my practice of party politics to the hallowed and cherished principles enunciated above, I take this opportunity to let you know that while I continue to remain a card-carrying member of PDP, I cannot and I will not subscribe to a wanted habitual criminal being installed as my zonal leader of the party.'

However, in explaining the party's devotion to Kashamu, Tukur wrote, 'Buruji Kasamu came to limelight in politics as a result of the role he played in the politics of Ogun State where both of you come from. He later became a rallying point in the South-West following the courts' orders in the series of cases brought about as a result of disagreements among leaders of the party in the South-West, and Ogun State in particular.

'In my opinion, Buruji became a rallying point because of the absence of a zonal executive in the South-West. This vacuum in the South-West has made him the person to whom many members in all the chapters of the party in the zone approach for one form of assistance or the order.'

Tukur personally signed the reply, which was made available to journalists in Abuja on Saturday.

The PDP Chairman, while preaching continuous dialogue and need for stronger partnership among stakeholders of the party, told Obasanjo that the need for the ruling party to reclaim the lost grounds in the South-West required the full support of party leaders like him.

Sounding conciliatory in his response to Obasanjo's letter, Tukur expressed his appreciation of the manner of approach by the ex-President in presenting his grievances on issues in the PDP South-West.

Tukur stated that there was the need for the PDP to attain success in the 'governorship elections coming up this year in Ekiti and Osun states and the subsequent elections in 2015 to reclaim lost grounds in the South-West.'

The PDP Chairman also addressed the complaint of the former President on the state of the PDP in the South-West. He said the crises within the PDP in the zone were there before he took over the mantle of leadership of the party.

In the same vein, Kashamu also responded to Obasanjo's letter on Saturday. He described the ex-President's letter as a 'cocktail of lies' and alleged that Obasanjo was blackmailing him.

He said, 'First, it is now clear to all and sundry why I have become the target of Obasanjo's wicked campaign of calumny and blackmail is his perceived loss of political relevance in Ogun State and the South-West. In his 18-page satanic letter to President Goodluck Jonathan, I was the other person - indeed the only one (after the President) - that he singled out for his venomous attack.

'In his usual hypocritical manner, he talked about not being able to work with me because of his principles and decency. But the questions Nigerians should ask him are: where were these principles when he used me to fight Gbenga Daniel? Where was his self-righteousness when I took the party structure from Daniel and handed it to Obasanjo? Where was his decency when he brought Gen. Adetunji Olurin to me and asked that I should roll my structure behind his governorship ambition?

'Where was his morality when he introduced me to South West PDP leaders like Engr. Segun Oni, Navy Capt. Caleb Olubolade (retd) and a host of others? Where was his discipline when he hosted me severally in his Hilltop mansion, taking me into his bedroom and innermost recesses? Where was his decency when he accepted donations from me to his church and other concerns?  Where was his gumption when he mounted the rostrum to sing my praises, praying for me as he did in May 2010 during a reception for the former Minister of Commerce and Industry, Senator Jubril Martins-Kuye? I can go on and on!'

He also denied that he is being wanted for extradition by the United States of America.

'I wish to state for the umpteenth time that there is no request for my extradition for any offence whatsoever. I recall that in my earlier response to him, I have challenged him to produce the request for extradition, if there is any.

'Indeed, contrary to his lies that I am wanted in the United States for some offences, the purported and over-flogged case is that of mistaken identity, for which I had been tried and discharged after my innocence was established by the British courts. I am already in court in the US asking that the earlier accusation (not conviction) against me be quashed. That process is ongoing.'

He further alleged that Obasanjo had asked the Beninoise government to frame him up anytime he visited the country.

Other prominent members in the  South-West zone of the party, on Saturday, lashed out at the  ex-president, describing him as difficult to please.

The Chairman of the caretaker committee of the party in the zone, Mr. Ishola Filani, who spoke on the telephone with our correspondent in Abuja on Saturday, said it was sad that Obasanjo who brought Kashamu into the limelight politically was also trying to destroy him.

Filani said, 'Tell me, who is good in the sight of the former President? When the late President (Umaru Yar'Adua) was alive, he was not good. President Goodluck Jonathan is not good. So, nobody is good in his sight.

'Obasanjo introduced Kashamu into politics when he used him to fight Daniel but later cheated him when it was time to share political offices in the state. Now, he is a criminal . Is he on the wanted list of the United States of America? If the USA is looking for someone, will the whole world not know?'

He further said heaven would not fall, however, if the ex-president steps out of the party.

Dayo said, 'It is a free world. Everybody is entitled to his opinion. Baba's (Obasanjo's) opinion is that he wants to step aside. After all, IBB (former military dictator, Ibrahim Babangida) stepped aside many years ago and heaven did not fall; Nigeria did not collapse because IBB stepped aside.

'If Baba too steps aside because of somebody (Kashamu) who has never offended him; somebody who has never been convicted by any court in the world, it is only an excuse for him to go and do something else against the PDP.'

However, former Minister of Justice, Richard Akinjide, who on Saturday hosted some elders of the South-West Peoples Democratic Party at his home in Ibadan, threw his weight behind Obasanjo.

He said criminals would not be allowed to rule the party.

He stated, 'We all heard what the former President Olusegun Obasanjo said. If you read the newspapers today (yesterday), he made some important comments. In essence, he is in support of the meeting we are doing here. If anybody says don't come to this meeting, disregard him. Don't trust those people. One of them is a drug addict; I mean the criminal elements who want to lead us. We won't allow them.'

Meanwhile, the Presidency on Saturday said President Goodluck Jonathan and other elders of the Peoples Democratic Party will take a critical look at the issues raised in a letter written by former President Olusegun Obasanjo to the party chairman.

Special Adviser to the President on Political Matters, Mr. Ahmed Gulak, said this in a telephone interview with our correspondent.

When further asked whether Jonathan will not personally intervene in the matter, the presidential aide said, 'Mr. President is one of the party leaders I said will handle the issue appropriately.'

In a related development, Vice-President Namadi Sambo on Saturday begged members of the PDP in Kaduna State to shun all overtures from opposition parties who he said were bent on destroying the PDP in the state.

A statement by his spokesman, Umar Sani, quoted Sambo as making the appeal during the PDP caucus meeting in Kaduna. He urged them to remain united despite the gale of defection that has affected the party in the state and zone. Additional information culled from Punch.