“Humour Has No Limit” – Basketmouth 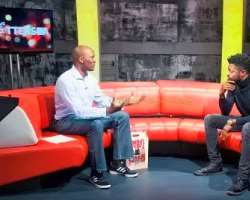 Nigeria popular comedian, Basketmouth recently granted an interview in London, where he opened up on his opinion towards his rape joke. He revealed that he did not leave Nigeria because of the missiles of words coming from all angles, but he had already booked h is flight to travel to London before the incident occurred. Basketmouth equally disclosed that people becoming offended over the rape joke, will definitely limit the kind of jokes he will cracking.

See his comments below:

On topics that are off limits, he stated:

“No. If you're a comedian, you have the power to crack jokes because the truth is humour has no limits. You can crack jokes about death, living, anything you want to crack jokes about. Humour has its own education that sends a message. Everything is funny. Everything in life is funny, there is humour in everything that we do. Society actually structures one. For me, the only thing that limits me is if I go for a church event I won't crack any joke that has any X in it. Then if I go for an event where everyone is drinking and drunk with their wives, I'm not going to be cracking jokes about Noah and Solomon, I have to crack a joke that suits them. I crack my jokes according to the audience. So that's my limit. I limit myself according to the audience, but when it comes to jokes there shouldn't be any limit. But because of the culture and everything, you have to respect the fact that people might find it offensive and just hold back.”

What if people find jokes offensive, he stated:

”The truth about jokes is no matter what type of joke you crack there are people in the audience that won't find it funny. People get offended for different reasons. Wale Gates was telling me about a joke he cracked about his wife and how someone was upset and said, 'Why would you crack a joke about your wife.' And he said 'Look, she's my wife. If anyone is going to be upset, can you let her be upset?' And she heard the joke before and she wasn't upset. People take jokes in different ways, unfortunately everybody made it look like it's the first joke that I'm cracking. I cracked a joke about “Two things involved” and it ended up being a positive angle and nobody talked about it. The only joke that people like that I've cracked right now is about me dying. I cracked a joke about my funeral and they loved it.”

RAPPER, EVA ALORDIAH, ALEXANDRA OPUTA ROMANCE, A SUBJECT OF SCAM AND UNDUE MEDIA PUBLICITY! …All the details you need to know

Foluke Daramola! She Is Our WIFE: Kayode Salako's Family Speaks On His Marriage