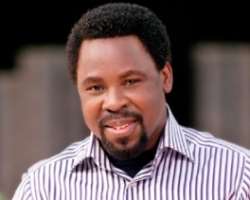 I awoke this morning to discover the following headline on Nigeria's Saturday Punch newspaper, 'Crisis Looms In APC Over Power Sharing'. A brief summary of the contents within is that “the five governors, who defected to the APC from the Peoples Democratic Party, were locked in a supremacy battle with some leaders of the three political parties that merged to form the APC.” Although this news is not all that surprising to those with any historical knowledge of and insight in Nigerian politics, what struck me on a personal note was the proximity of this information to the recent prophetic message delivered by Prophet T.B. Joshua, a clergyman for whom my respect is steadily deepening. “There will be a leadership tussle on who will lead and who will be presidential candidate in APC which will affect them as a political party,” Joshua had told his congregation during their New Year service. “They should be vigilant. Many are with them in flesh but not with them in spirit.”

Some may insinuate that this is an obvious eventuality when considering the pedigree of Nigerian politics and politicians but I however am viewing the prophecy contextually and not from the perspective of an isolated proclamation restricted to a certain season. I started viewing Joshua's television station Emmanuel TV, albeit reservedly, some time ago under the stern and persistent pestering of my mum who is an avid fan and insisted that I take my brother to The SCOAN because of his inexplicable health challenges. I must confess that although I still maintain some degree of scepticism, my spiritual understanding has certainly broadened through viewing his station. One aspect that captures attention is the prophetic ministry he operates in, something my scientific frame of mind took considerable time to fathom. Joshua prophesies to individuals with almost 'alarming' accuracy and consistency during his services which are all broadcast live, the results thereafter indicative of their source being Divine rather than demonic, as many have hastily concluded.

Coming to Joshua's national and international prophecies, although they are often diabolically worded and lacking in specific facts, his repertoire of fulfilled prophecies over the years is rather remarkable. To take Nigerian politics for example, through some focused Googling, I have seen video evidence of Joshua prophesying about the formation of APC several years ago in 2010, a time when no such plan was in motion. It is on record also that he predicted the postponement of the 2011 elections alongside a whole host of other national events including plane crashes and the demise of key political figures.

The Sunday before Joshua's New Year message, in the presence of Malawian leader Joyce Banda, two events also transpired which should be food for thought for the political elite to whom Joshua unswervingly addressed in his prophecy. Firstly, an official letter was read from South Sudan's leader Salva Kir, acknowledging the prophecy Joshua had given several months ago about an imminent attack on a leader of an East African nation, and requesting for prayers. It is pertinent to note that merely days after public prayers had been offered for ceasefire at The SCOAN, an army of 20,000 rebel youths bent on rampage where surprisingly convinced to halt their attack and peace discussions are currently being held by both parties. The situation is still volatile but there is a considerably better outlook then there was at the time this letter was sent. Secondly, Joshua prophesied that an attack was coming against the nation of Russia, calling for prayers for their leader lest the imminent crisis and subsequent opposition would bring him down. The following day, two terrorist attacks occurred within Russia, causing multiple deaths and casting doubts on national security, especially in lieu of the upcoming Winter Olympics. Coincidence?

Thus, my main point of penning this piece is simple – let leaders take this message by T.B. Joshua in proportion to the seriousness of its contents. The testimony of time, in my humble opinion, has trumpeted enough evidence to know that God Himself is behind his words. He said, “What will happen in 2014 will result in the correction of the corruption in Nigeria because many corrupt leaders will go down in 2014. If many key leaders go down with 2014, what will now happen in 2015? Pray for 2015 to be fulfilled. The beginner is not the owner but the finisher.” Let this prayer echo on the lips of Nigerians nationwide with the knowledge that this year, corruption has no hiding place or hold in our nation's political framework.