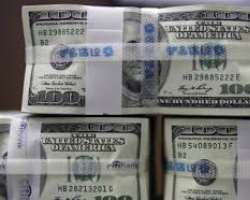 
- US dollar reserves held by global central banks fell slightly in the third quarter from the prior quarter, according to data from the International Monetary Fund released on Monday.

The dollar share of IMF reserves totalled US$3.80 trillion (RM12.5 trillion) in the third quarter, or 61.4 per cent of the total allocated reserves.

In the second quarter, the dollar’s share stood at 61.8 per cent, IMF data showed.

Global total foreign exchange holdings rose to US$11.43 trillion in the third quarter from US$11.14 trillion.

Global reserves are assets of central banks held in different currencies primarily used to back their liabilities. Central banks have sometimes cooperated in buying and selling official international reserves to influence exchange rates.

Euro reserves rose to US$1.50 trillion, or 24.2 per cent of the total allocated reserves, in the third quarter from US$1.454 trillion in the second quarter.

The IMF broke down central bank holdings in the Australian and Canadian dollars, which were previously classified under “Other Currencies.”

They held US$112.5 billion in Canadian dollars, up from US$109.9 billion in the second quarter.

The Australian and Canadian dollars have been in demand since the global financial crisis as relatively safe havens. The aussie in particular was highly desired given its yield though enthusiasm has cooled compared with the loonie, based on the COFER data.

The move by the IMF earlier this year is part of a wider review to provide more transparency in global financial data. It is also a reflection of a growing trend by central banks around the world to diversify their holdings beyond the US dollar, the euro and the yen.

Unallocated reserves, or those not known and believed mostly held by China, rose to US$5.24 trillion in the third quarter from US$5.06 trillion in the previous period. – Reuters