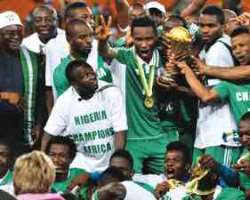 
Nigeria slipped down on the FIFA world ranking and now the least rated team in their Brazil 2014 Group F as the countdown to the World Cup continues.

In the ranking released on Thursday by the world body, Super Eagles slipped one spot to number 37 while Cote d'Ivoire remain Africa's best at 17. But while the Eagles slipped one of Nigeria's World Cup opponents moved by 12 places to now stand at 33. Bosnia and Herzegovina gained two spots to finish at 19th while former World champions Argentina maintained their enviable spot at 3rd. Eagles arrived at the USA '94 World Cup as the 5th ranked team in the world. Prior to Thursday ranking the Iranians were far behind the Eagles.

On Wednesday Nigeria coach Stephen Keshi underlined the capabilities of the other two teams besides the respected Argentina.

He said, 'Why are we talking of only Argentina, we can defeat Argentina but Iran qualified long before us and Bosnia Herzegovina also did their qualification in style with plenty goals and we must not underrate any of these teams.'

World and European champions Spain top the final ranking of the year as the team finish 2013 ahead of second-placed Germany. Vicente del Bosque's men have now topped the rankings at the end of each of the last six calendar years following an unbeaten World Cup 2014 qualifying campaign that saw la Roja collect 20 points from a possible 24. Colombia and Portugal complete the top five followed by Uruguay, Italy, Switzerland, Netherlands and Brazil.

Bosnia-Herzegovina is the only team on the up inside the top 30. Fresh from reaching a first World Cup finals, the Dragons are now 19th, up two places, meaning France and Mexico drop one place each to 20th and 21st respectively.

On Thursday, the Nigeria Football Federation announced the selection of Vitoria Hotel Concept Campinas as the team base camp hotel of the Eagles for next year's finals. The facility was inspected after the draw earlier this month.

'I love this place. It is good for our team and we will be able to achieve full concentration,' Keshi said of the location.