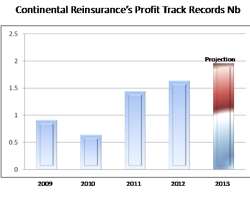 
Continental Reinsurance is promising to achieve one of the strongest improvements in revenue and profit this year. The reinsurance company has maintained a stable growth in revenue for the past several years and profit has grown every year since 2009. The company seems to be one of the few in the market that are still able to maintain the status of growth companies after most of the rising stars fell during the financial crisis.

The company lifted after tax profit by more than 127% to N1.44 billion in 2011 and maintained further growth in 2012. An accelerated growth in profit can be expected from Continental Reinsurance in 2013.

The full year profit projection will amount to an accelerated growth of about 20% from the full year profit figure of N1.63 billion the company posted in 2012. It had improved after tax profit by 12.7% from N1.44 billion in 2011. The company has shown one of the most stable earnings performance records from the insurance sector in recent years. In the heat of the financial crisis in 2008, it suffered only a profit drop of 30% and recovered with a big profit leap of over 91% in 2009.

A stable and continuing growth in revenue has been maintained by the company for several years and growth is expected to accelerate as well for the company this year. At the end of the third quarter, gross premium income came to about N11.80 billion, which is a rise of 25.8% over the corresponding revenue figure in 2012.

Profit isn't growing as rapidly as revenue for the company this year and this is due to both some cost increases and some revenue shortfalls, which have caused a decline in profit margin. Two major cost elements encroached upon revenue during the period and therefore constricted profit margin.

The rising costs include net insurance benefits and claims, which at N4.97 billion, grew slightly ahead of net insurance premium at 27.2% compared with 25.8% during the period. The second is underwriting cost, which also grew ahead of revenue at 26.8% during the review period to N4.09 billion. The two cost elements depressed underwriting profit, which grew at a slower pace of 20.3% than the 25.8% expansion in net premium income.