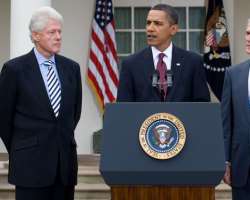 
At least three American presidents will travel to South Africa to attend memorial services for anti-apartheid icon Nelson Mandela, who died on Thursday at age 95.

The White House said on Friday that President Barack Obama and first lady Michelle Obama would travel to South Africa next week to pay their respects. They will be joined on Air Force One by former President George W. Bush and wife Laura Bush, who 'gratefully accepted' the invitation from the Obamas, a Bush spokesman said.

The White House said travel arrangements were still being made and it was unclear when the Obamas and Bushes would depart. A memorial service for Mandela will be held on Tuesday at a stadium in Johannesburg, followed by a smaller funeral on Dec. 15 in Mandela's hometown.

Former President Bill Clinton said he also planned to travel to South Africa, along with his wife, former Secretary of State Hillary Clinton. It was unclear whether the Clintons would also fly on Air Force One.

'My whole family will be there,' Clinton said in an interview with CNN. 'And we're looking forward to having the chance to say good-bye one last time.'

Mandela's death has sparked an outpouring of memorials and celebrations of the former prisoner turned president who led his country out of apartheid rule. In remarks following Mandela's death, Obama counted himself as one of the countless millions inspired by the South African leader.

'Like so many around the globe, I cannot fully imagine my own life without the example that Nelson Mandela set,' Obama said on Thursday.

For Obama and Bush, the trip to South Africa will mark the second time they have been on the continent together this year. The two men were in Tanzania at the same time this summer, though on separately planned trips. They held a brief event together to honor victims of the 1998 US Embassy bombing in Dar es Salaam. Mrs. Obama and Mrs. Bush both also attended an African first ladies summit during the trip.