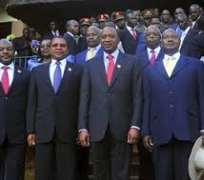 
The five nations in the East African Community regional economic bloc have signed an agreement to adopt a common currency.

The presidents of Burundi, Kenya, Rwanda, Tanzania and Uganda met Saturday in the Ugandan capital, Kampala, to sign a protocol for the creation of a monetary union to be established in 10 years.

Kenyan President Uhuru Kenyatta, the new chairman of the EAC, says the monetary union will lower transaction costs in the region by eliminating losses incurred in exchange rates.

The EAC began 13 years ago with the goal of creating a common customs union, market, monetary union and a political federation of East African states.

Progress has been slowed, however, due to concerns of the member countries about the impact of the bloc’s decisions on their individual economies.