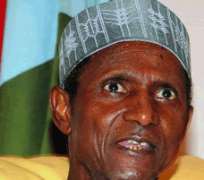 The heavily guarded modest house where the matriarch of the Yar'Adua family resides could easily be mistaken for a police station, but for about a dozen shabbily dressed middle-aged men and young street beggars, otherwise known as Almajiri, on the corridor of the building opposite the entrance. Not less than five of the young men were sleeping on the corridor, apparently exhausted that afternoon following sessions of intense prayers for the President in a mosque attached to the house.

A security operative in the matriarch's house told Sunday Sun that all the relatives of the President living with the aged woman, Hajia Dada Yar'Adua, had left for Abuja or other destinations.

Although the detective swore that Dada, as the President's mum is fondly called, was indoors, a source close to the first family however confirmed to Sunday Sun that the woman was whisked to Abuja in a presidential jet the previous day.

Access to the famous house in Katsina was thrown opened for only a day or two after the return of Yar'Adua to the country last week Wednesday, as relations and well-wishers trooped there to rejoice over the news and pray for the President.

After the brief festivities, the security corridor around the house returned and people afraid of combat-ready mobile policemen and other security guards hardly moved close to the house again.

Katsina literally caught cold, according to Abu Bello, a trader, when the international community and many Nigerians started expressing doubts over Yar'Adua's arrival or fitness.

According to him, the tempo of activities in Katsina nose-dived as the state governor, Ibrahim Shehu Shema, shuttled between Saudi Arabia and Abuja because of the intense speculations over Yar'Adua's state of health.

Similarly, as workers in several offices gathered in groups regularly to discuss all manner of rumours on the Yar'Adua health issue, government activities started dwindling. Although Katsina has remained calm, socio-economic life in the state capital and beyond was not spared as the mood of uncertainty kept spreading from Abuja. Many of his kinsmen appear visibly concerned as fears of the President's incapacitation or death persist.

Asked to comment on life without Yar'Adua for over 90 days, the state chairman of the Peoples Democratic Party (PDP), Alhaji Maiwada Daudawa, retorted that all he was interested in is speedy recovery of the President.

To demonstrate his desperation, Daudawa cajoled this reporter to lead a Christian prayer in the entirely Muslim gathering under the mango tree in the party secretariat for the President.

A trip to the Katsina Government House had yet another surprise for this reporter.

On the impact of Yar'Adua's absence on the seat of government in the state, a civil servant who pleaded anonymity, insisted that the nation and not only Katsina State was crumbling.

'Just look around this Government House, there is virtually nobody. If you have to count the number of staff on duty, you can do that within five minutes. If you go round, you will see not more than 20 people, including those at the gate,' he averred.

'The situation is alarming. Our society is not commercially-oriented, especially in the North. Whatever the common man gets here must come through the government. But the governor is not always available. He is either way to Saudi Arabia or Abuja or God knows where.

'All government activities are virtually at a standstill. Everywhere is dry. Go to the market, the traders are not selling their wares. So, where is the money? Money is not in circulation.'

Sa'idu Sadik, a plumber, said when the President and the First Lady, Turai, used to visit Katsina regularly, the less privileged usually got palliative measures from different sources.

He added that although Yar'Adua was not known for dishing favours to his kinsmen directly, the First Lady was known for her generosity, especially to the less privileged.

'If you look critically at the situation, the main concern is uncertainty.  Even local government chairmen no are longer certain of what the future held for them. They are not assisting our people again.

'When Yar'Adua was hale and hearty, people from all walks of life received patronage and the average citizen benefited in the process. Now, nobody is coming to Katsina. Even the governor and the deputy are not in town. Tell me, who is in charge?' he fumed.

Where are you, Yar'Adua? Let us see you or hear from you – Kinsmen

As anxiety gradually sips the vitality out of the average kinsman of the President, they are fervently yearning that Yar'Adua address the nation either through radio or television.

'We are worried and disturbed that we have not seen his picture or heard his voice since he returned. Is he dead? From God we come and to God we shall return. Let our leaders prevail on those helping him to allow us to see our President.

'May be something unwholesome had happened. We don't know, but we shall continue to pray until Allah's wish is unraveled,' Hassan Abdul'aziz, said.

Contrary to reports that an Intensive Care Unit (ICU) ambulance had been stationed in Katsina, Abdul'aziz said that would have been a sign that Yar'Adua would soon be in the ancient city.

Sunday Sun investigation also confirmed that there was no preparation for Yar'Adua's home coming in the state capital although not a few of his kinsmen wished he would come and recuperate at home.

Surprisingly, many people interviewed by this reporter in the quarters adjoining the Yar'Adua family house in Katsina metropolis showed marked indifference to the return or fitness of the President even as they joined other Katsinawas and Nigerians in looking to forward to seeing him.