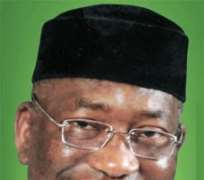 Akhigbe was a retired Vice Admiral of the Nigerian Navy, who served as the CGS (equivalent of the Vice President of Nigeria) during the General Abdusalam Abubakar led military government from 1998 till the termination of military government in Nigeria, in 1999.

He had also previously served as Military Governor of Nigeria’s Ondo State and Lagos State, after which he was appointed Chief of Naval Staff, the highest-ranking officer of the Nigerian Navy.

Reports indicate that he died at the weekend in England, after a long battle with cancer.

Before his appointment as the chief of general staff following the death of the then Head of State, Gen. Sani Abacha, in 1998, Akhigbe, who hailed from Edo State, was the Chief of Naval Staff.

After his retirement from the navy he went to read law and became an attorney with specialisation in Maritime and Real Estate Law.

He was a seasoned businessman with substantial interests in real estate.