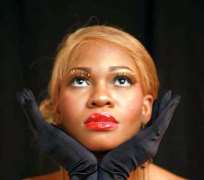 The “Jawo Jawo,” “Don't touch my Body,” and “Skibo” songstress died of hypertensive heart disease on Valentine's Day, 14th February, 2013, shortly after her return from the United States of America where she attended the Grammy Awards.

She was married to a certain Andrew Harvey, a Briton, before her death, and she appeared on the 2012 edition of Big Brother Africa where she seemingly fell in love with a rapper, Prezzo.

She was signed to Kennis Music, and was known to enjoy a close relationship with television presenter, Denrele Edun.

A lot of fans have posted various goodwill messages online on the late singer's post-humous birthday, and it is evident that even though Goldie has passed on, she lives on forever in our minds.
E24-7-Magazine

Goldie's Hubby, Andrew Harvey Opens Case On Prezzo 'He's Too Manipulating, She Despised Her And Distanced Herself'