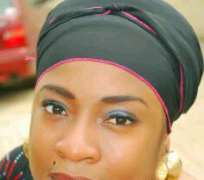 An online report has claimed that popular Nollywood actress, Foluke Daramola-Salako has allegedly confessed to have bleached her skin in order to keep her husband from poachers. According to the report, the busty actress allegedly admitted on a television programme monitored by it, to have changed from her former chocolate skin colour to her now-fair complexion skin colour.

"Foluke further confessed that she had to do that because she needed to 'keep her man' and added that it is also the special 'thing' among Nollywood actresses to do that," a part of the report said.

Foluke reportedly disclosed this while speaking as a guest on Lagos-based Television Continental (TVC) programme,'Your View', anchored by Yeni Kuti, daughter of late Fela Anikulapo, and two other ladies and aired on Friday morning of September 20, 2013. Afro Candy To Feature Two Daughters In Her Latest Movies?