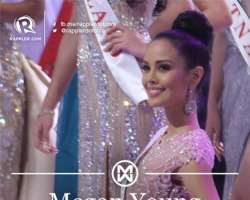 In the coronation held Saturday, Sept 28, in Bali, Indonesia, the actress turned beauty queen bested 126 candidates from all over the globe, earning for the Philippines its first Miss World title.

Young, who placed first among the top 10 semifinalists also won in the Top Model challenge event and excelled in the Beach Fashion pre-pageant challenge, where she was among the 11 finalists.

In the question and answer portion where the candidates were given 30 seconds to tell the judges why they deserve the crown, Young expressed her belief in a "core value of humanity" which guides people's actions. She hopes to use this to show others how they may contribute to society.

For the "Beauty with a Purpose" challenge, Megan chose to extend aid to flood victims in the Philippines.

In line with tradition, Young will head straight to London where she will reside during her reign.

Here are the winners: