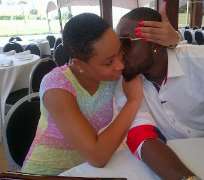 It may seem that former Big Brother Africa The Chase housemate, Pokello Nare's father does not approve of the ongoing romance between his daughter and fellow housemate Elikem Kumordzi. According to reports, Pokello's dad, George Nare intentionally avoided meeting Ellikem, during the latter's visit to Zimbabwe earlier in September, contrary to media reports by the couple that he was busy.

It was gathered that the Retired Colonel chose not to meet with his daughter's boyfriend allegedly because he believes doing so was against the tradition, which must be strictly observed.

'My daughter called me and told me she was coming to Bulawayo with her boyfriend and wanted me to meet him, but I was very frank with her and I told her that it was against our tradition…I can only be able to meet him when they come for official introductions' he reportedly said.

George Nare however expressed his support for his daughter, adding that although the relationship is in its early stages, he is prepared to back whatever decision she makes. 'As a father I believe Pokello is a grown up woman who makes her own decisions and she has chosen to fall in love with this guy, Elikem and her happiness is what counts most to us...All I can do is help her make the best of her life and facilitate her to achieve her goals.'