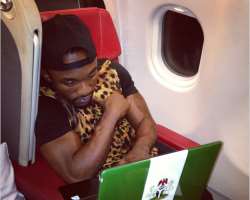 Few days ago, former MTN Project Fames winner, Iyanya signed a brand endorsement deal with indigenous computers and IT company, Zinox Group. The deal, according to information, runs into millions of naira, at least, in double digits. Read It HERE

The brand ambassadorial contract was signed by both parties and will see the 'Kukere' master do a song for Zinox Computers, run some advertisement campaigns and attend the company's events within the duration of the contract; 12 months, as gathered.

Kick starting his new job, Iyanya has showed off his customised Zinox laptop made in the Nigerian colour.

Computers now made by the company will have Iyanya's songs pre-loaded in them.