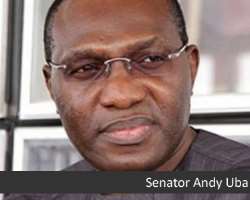 The other suspended members are Andy’s younger brother, Chris, factional chairman of the party in the state, Ejike Oguebego, Benji Udeozor, and Mrs Tonia Nwankwu.

The party’s NWC had summoned the quintet to appear on Wednesday to defend themselves on allegations of indiscipline.

The suspension was conveyed in separate letters to the quintet. The five letters were signed by the party's Acting National Secretary, Remi Akintoye.