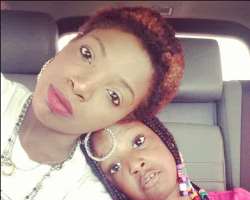 Some overzealous fans are gradually making some Nigerian celebs loose their tempers on social media networks. Few days ago, it was Wizkid who got into the trap and today, it is the wife of 2Face Idibia, Annie Macaulay.

After posting her recent picture online taken with her only daughter, Isabela, a fan (name withheld), wrote, "that mouth of hers I will kiss it one day, I promise her that."

The post to the up and coming actress on the popular social media platform, twitter, got a harsh response from her. Annie replied, "you are a fool, get off my page, sick man."

Meanwhile, there have been responses to the tweet by the fan, who many condemned for inciting Annie to go haywire on twitter with her response. Some have called for silence as the best way to treat such comments by some fans, while others believe the fire for fire approach is appropriate.