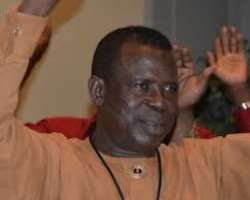 Evangelist Joseph Adebayo Adelakun and his Ayewa International Gospel Singers who hit the limelight with an album entitled “Amona Tete Mabo” in 1984 are set to celebrate the 37th anniversary of their Ayewa Band.

Expected at the Thanksgiving Service are Dame Emmanuella Fashola, First Lady of Lagos State as the mother of the day, Pastor Ade Popoola as the Chairman, Bishop Francis Wale Oke as Speaker among other top dignitaries from all walks of life.

Evangelist Adelakun who has been winning souls for Christ and propagating the kingdom of God through his music was born on June 12, 1949 to his Muslim parents- Alhaji and Mrs. Salami Adelakun.

In spite of his Muslim background; he was a lover of Christ from his youthful age. He developed great interest in music from primary school days and spent most of his time playing drums especially at Baptist Church, Oke Ogun in Saki.

He proceeded to Ogunpa in Ibadan to study Electrical Engineering with the assistance of his elder brother, Magistrate Bayo Adelakun. He later joined the Nigerian Army in 1968, after his studies at the Electrical Company and was posted to Nigerian Army Barracks –Engineering Construction Regiment (ECR) based in Ede, Oyo State (now Osun State).

His sports ability in 1975 won him Gold Medal in 800m race during Army Sports Week. He was gifted and had great interest for music and sports while in the Army.

He released seven albums while in the Army during his service as orderly to Brigadier D.O. Ajayi (retired), his boss and mentor. He resigned from the Nigerian Army at the Command Staff College, Jaji, Zaria in 1982 to continue his musical career.

Adelakun released his first album entitled “Emi yio Kokiki Re” in 1978 with the support of Evangelist Bankole who sold his Vespa motorcycle for N200 to produce the album.

Pastor Adelakun has produced more than 30 albums and taken gospel to all parts of the world through his singing ministry and has received local and international awards.