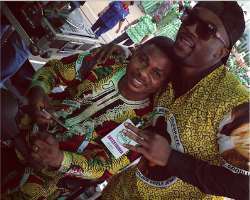 During the regime of the late military dictator, General Sanni Abacha, he paid some artistes, Shina Peters, Zaki Adzee and others to sing for his transition programme in Abuja, shortly after the man died, people of conscience threw insults at them for selling their conscience. Some apologised, some took it as one of those things while others, till today, faded off.

Now during the time of Goodluck Jonathan, it's obvious that people are suffering, children are helpless and the constitution of the land has been audaciously violated with impunity; no man in his right thinking would bid for the re-election of GEJ. But it's so shocking to note that, the likes of Inyaya, the hip hop rave of the moment and Yinka Ayefele, the Juju/gospel singer, despite what is happening in the society, decided to allow to be used, just as in the days of Sanni Abacha, to campaign for the re-election of the incumbent PDP governance.

I just hope that the story will not end as it did in 1993. They both took some time to take a picture at a recent campaign for President Goodluck Jonathan. We hear they might work on a single for him soon. Until then, let's keep our fingers crossed.