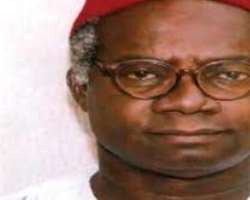 
The Conference of Nigerian Political Parties (CNPP), on Saturday decried the level of corruption and other vices in the country, which it said were impeding national development.

The CNPP National Publicity Secretary, Mr Osita Okechukwu made this known in Abuja in an interview.

Okechukwu, who said that corruption had eaten deep into the fabrics of the Nigerian society called for a total campaign to tackle the menace.

'For there to be any meaningful development, corruption has to be tackled first, it is the main problem be devilling the country.

'When a road contract is awarded, and year in year out you continue to budget for the same contract which is not executed, the outcome of course results to corrupt practice,' he said.

Okechukwu said: 'When a transparent leadership is enthroned in the country, then Nigeria will advance in all facets.'

He further said that religion and ethnicity were also problems plaguing the country but the main problem 'is corruption''.

'The corrupt officials in Nigeria do not remember religion, if you go through the ring leaders of the pension scam; they have all the federal character so there is no crisis there.

'The impact of that pension scam is that it led to the death of some of the pensioners because they could not get their pension.

'The result also is that it had made those in service to start stealing from government coffers because the scam is a pointer that they might not get anything when they retire,' he said.

Okechukwu, who is a chieftain of the All Progressives Congress (APC), said 'a good government will come in power in 2015 and will tackle corruption.'

'If you go through the APC manifesto after the preamble the next chapter spells out war against corruption and the need for national orientation; which is what we strive to achieve.

'It is believed that come 2015 general elections a better government will come on board,' he said.

He called for accountability in running the affairs of government at all levels. (NAN)