Why Okonjo-Iweala Should Resign Now! 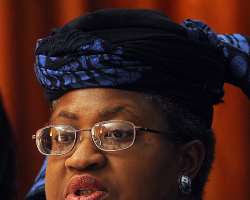 Ngozi-Okonjo-Iweala, Finance Minister Of The Federal Republic Of Nigeria
Listen to article

She was recently listed as one of the most powerful women in the world. Her name conjures up the image of an Amazon who symbolises excellence and the height of intellectual achievement. She is by no means a role model and a worthy example of the level Nigerian women can attain if given the opportunity to excel. There is also no doubt that the Minister of Finance, Dr. Ngozi Okonjo-Iweala, is one of Nigeria's proud exports.

One cannot but admire her simplicity and self-effacing demeanour. Personally, I am in awe of her spartan fashion style. It portrays a woman not given to vanities or the mundane. For someone who has achieved global acclaim, one would expect her to wear her achievements like a diadem as most Nigerians of even lesser status want to do. But not so for our finance minister who is found to usually spot her simple Ankara fabric and trademark round head tie jauntily placed on her head. She seems not to take herself too seriously.

That Okonjo-Iweala is loved and spoken of in fond terms by ordinary Nigerians is also not in doubt. This outpouring of love was displayed in 2012 when she contested the position of the President of the World Bank. Many Nigerians rooted for her. Her quest to be African's first woman to head the Breton Wood institution became a national obsession. With the media rooting for her candidacy, her fellow citizens thought she was qualified to lead the foremost global financial institution. When she lost, Africa was disappointed.

Prior to her 2003 appointment by Obasanjo as finance minister and head of the Economic Management Team, only a few Nigerians knew her. As a finance minister, she was known to have tenaciously used her influence to negotiate a deal with the Paris Club to pay a portion of Nigeria's external debt (US $12bn) in return for an $18bn debt write-off. Her role in the deal was widely acknowledged.

During this time, the Harvard-trained economist was also known for her insistence on accountability in public spending and budgeting. Among many of her well-known achievements was the practice of publishing each state and local government's monthly financial allocations in the newspapers. This went a long way in increasing transparency in governance. She was also instrumental in helping Nigeria obtain its first ever sovereign credit rating (of BB minus) from Fitch and Standard & Poor's. Nigeria then was considered as having defaulted on its sovereign debt in 1983 (debt rescheduling is considered a type of default by rating agencies).

In spite of the controversy that beclouded her removal by Obasanjo, Okonjo-Iweala left with her reputation intact as one of Nigeria's most hard-working and celebrated ministers of that era. She returned to the World Bank having been appointed as the Managing Director in 2007. To underscore the importance of the role she played in her first term, President Goodluck Jonathan appointed her as Minister of Finance with an expanded portfolio as the Coordinating Minister for the Economy in 2011. But how well has she performed in her second coming? Has the Jonathan administration provided the enabling environment for her economic policies to impact positively on the economy?

As a coordinating minister, Okonjo-Iweala has extensive influence in shaping the direction of Jonathan's economic team and the transformation agenda. But that is as far as it goes. In this largely corrupt administration, she has shouted herself hoarse on the need to reduce Nigeria's bourgeoning recurrent expenditure which accounts for a large chunk of the national budget. She has harped on capital projects to reduce the worsening unemployment rate which she once said gives her sleepless nights. But the government she serves has so far not listened or does not seem to “give a damn”. In spite of all her efforts, the economy is still in doldrums; poverty has worsened.

This makes it strange that Okonjo-Iweala remains in a government that is on record to explicitly encourage corruption by not fighting it. Doesn't she feel a sense of frustration that her efforts at bringing the economy back have so far been a resounding failure? Does the minister not know that nothing she does will matter in the present political climate that encourages corruption and waste by public officials? Is she not concerned by the lack of political will by the President to fight economic crimes that are inimical to economic development? Okonjo-Iweala should know that no economic initiative will work in a country where corruption pervades the fabric of governance.

How can interventions such as hers work in a corrupt country such as ours where public funds are stolen in a brazen manner by government officials with impunity? It is for this reasons that her efforts at reviving the economy will continue to hit a brick wall. No matter how sound the economic decisions she makes, they will be subverted somewhere along the line by economic and political saboteurs in and out of government. It is worse that the President allows them roam freely and gleefully. There is massive corruption in the land. The government is losing billions to oil thieves. This government is bloated which makes its running expensive.

Instructively, no situation best symbolises Okonjo-Iweala's dilemma than the worsening unemployment rate. The figure released by the National Bureau of Statistics shows that unemployment rate has risen to 25 per cent. Historically, from 2006 until 2011, Nigeria's unemployment rate averaged 14.6 per cent reaching an all-time high of 23.9 per cent in 2011 and a record low of 5.3 per cent in 2006. Yet, it was in these years that Okonjo-Iweala was a minister. What has gone wrong? Let us not be too quick to blame it on global unemployment rate. The minister must be courageous enough to tell this government the home truth. I suspect the credibility she has built is at stake if she stays on to serve this government.

How can a first class global technocrat like her be comfortable in a government that has refused to fight corruption; where the ruling elite engage in conspicuous consumption at the expense of the suffering masses? And, where a very few ruling class appropriate a large chunk of the treasury in outrageous salaries and allowances? Where is the economic and moral justification?

It is also an antithesis that she is the finance minister to a government that encourages indiscriminate borrowing when she was known to have worked hard to make our country debt-free in her first coming. The Jonathan government is on a borrowing binge, ironically, at a time the country is earning huge oil revenue like never before. Now, the minister is defending this administration's N251bn debt-for-infrastructure debts. Something is definitely not right here. Recently, the Debt Management Office raised the alarm on Nigeria's debt profile which it says may hit $25bn (about N3.75 tr) by 2015. Our domestic debt also stands at more than N6tn, while foreign debt at the end of 2012 was more than $6.5bn. Even the governor of Central Bank, Lamido Sanusi, is alarmed. Hear him: “We are borrowing more money today at a higher interest rate while leaving the heavy debt burden for our children and grandchildren.”

Is the minister listening? Okonjo-Iweala should know that Nigerians hold her in high esteem. They also want her to succeed. But it is doubtful if this is possible with this licentious government. She must find the courage to resign if her efforts are being deliberately sabotaged, as they appear to discerning Nigerians. She should not continue to lend her hard earned name to this charade called Jonathan's administration. There is no use rescuing a sinking ship whose captain lacks the will to steer it in the right direction.