2Face Speaks on His Babymama's Marriage to Pastor Adeoye 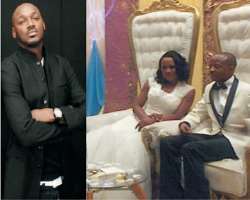 It's kind of funny though for anyone to have thought of asking AfroPop star 2Face Idibia how he felt over his babymama, Sunmbo' marriage to Pastor Adeoye in Lagos recently. But he was asked the question anyway, and his answer is as cool as would be expected:

2Face, who has two kids from Sunmbo when their love was hot, said:

“Sunmbo deserves all the best, I wish her many good things in her marriage. She's a nice person,” he told an online magazine.

Many had thought he actually loved Sunmbo more than his other babymamas and would marry her. It seems her deep involvement with church activities later made him change his ming. #GoFigure. Lols!