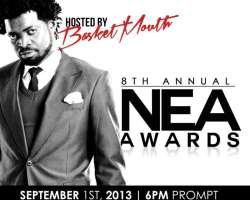 August 1, 2013 – New York, NY – The Nigeria Entertainment Awards is a few weeks away, and all the nominees, members of the entertainment industry and the fans are looking forward to a great night of celebration anchored by a great host.

It is with great excitement that the producers announce that the host of the 8th annual Nigeria Entertainment Awards is non-other than the incomparable comedian, by the name of Bright 'BasketMouth' Okpocha. BasketMouth is a well-known and respected comedian who has won numerous awards, and hosted lots of shows and so is no stranger to such a task. The comedian who recently concluded a US Tour titled Basketmouth Uncensored, is honored to be hosting the NEAs, and looks forward to a wonderful event that supports the industry.

Also in attendance are Denrele Edun and Bovi amongst others. Representing for Nollywood are Rita Dominic, Funke Akindele, Ramsey Nouah, Uti, Ali Nuhu and OC Ukeje. With more names being confirmed and added to the list, this year's award show is on track to be another fun-filled, star-studded show for the memory books.

Red carpet begins at 5pm, and the award show begins at 6pm prompt. To avoid last minute scrambling, all attendees are encouraged to get their tickets as soon as possible on the website: www.nigeriaentawards.com and also, to arrive on time. The NEA Awards is sponsored and supported by Arik Air, CoolFM, MTech, BeatFM, YSGHubs, Mayven PR, Bella Naija, 360Nobs, Jaguda, Firematic, and a host of others. The producers are thankful to all current sponsors and partners, and will in the coming weeks unveil more details for the pre-events leading up to the awards.

For all press and media related inquires please contact:

Mayven PR
Tel: 347 762 0677
Email: [email protected]
About NEA
The NEA AWARDS is an annual entertainment award show held in the United States, with the sole purpose of celebrating and recognizing the numerous contributions of entertainers to the African entertainment industry, while at the same time promoting the image and rich culture of Nigeria.