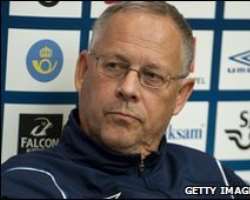 Nigeria have appointed former Sweden coach Lars Lagerback to lead them at the World Cup in South Africa in June.

Lagerback was chosen ahead of Glenn Hoddle and Sven-Goran Eriksson, who had both been linked with the job.

But he added: “Lagerback has now signed a five-month contract to take Nigeria to the World Cup.”

Lagerback succeeds Shaibu Amodu as coach of the Super Eagles after they finished third at the African Nations Cup in Angola last month.

The Swede will watch Nigeria's friendly against DR Congo on Wednesday and will be based in Nigeria from next month until the World Cup.

He began work with the Sweden Football Association in 1990, concentrating on the the country's junior teams.

In 1996, he took over the Sweden B team and stayed there until 1998 when Tommy Soderberg took him on as assistant coach for Sweden.

In 2000, he was promoted to the position of joint-coach, a responsibility he would share with Soderberg until 2004.

Under his guidance, Sweden qualified for Euro 2000, but lost in the group stages.

In 2002, he led Sweden to the World Cup, where they lost to Senegal.

Sweden then qualified for Euro 2004 reaching the quarter-finals where they lost to the Netherlands and two years later Lagerback took Sweden to their fourth consecutive championship, the first time in their history.

Under Lagerback Sweden also qualified for Euro 2008 where they were eliminated in the group stage after losing 2-0 to Russia.

Lagerback resigned after failing to qualify Sweden for the 2010 World Cup in South Africa where Nigeria have been grouped with Argentina, Greece and South Korea.