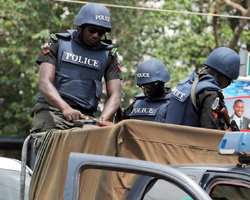 
After about 48 hours in the police Headquarters, Abuja, embattled Leader of Rivers State House of Assembly, Hon. Chidi Lloyd was Friday morning moved to Port Harcourt, the state capital.

Family sources told Pointblanknews.com that Lloyd was flown by air into Port Harcourt, but that the police were not able to arraign him as arranged.

According to the source, the lawmaker, escorted by officers from the Force Criminal Investigation Department (FCID), left the Nnamdi Azikiwe airport, Abuja, in good time, but were late for court in Port Harcourt.

“The traffic from the airport into town (Port Harcourt) was something else. Before they could finish the paperwork at the State CID and move to court, it was already late,” offered the source, adding, “We are now looking forward to Monday.”

Police sources added that the lawmaker was being detained at the state CID, but would be arraigned “first thing on Monday morning.”

On why he had to be moved to Port Harcourt, the source said they were acting on instructions. He, however added that the preference for Port Harcourt may have to do with the fact that the alleged assault was committed there.

Meanwhile, Lloyd’s detention has continued to generate mixed reactions from those in the political camp of Governor Rotimi Amaechi, and those opposed to his style of governance.

A pro-Amaechi lawmaker who spoke to Pointblanknews.com on the condition of anonymity, lamented that Lloyd’s arrest had thrown anti-Amaechi lawmakers into jubilation mood.

“The way they are celebrating shows that Lloyd may face a kangaroo trial. They all seem to know the outcome of the trial, suggesting that there are some powerful interests pulling the strings in the state.

However, Peoples Democratic Party (PDD) chairman in the state, Brother Felix Obuah countered, saying there was nothing wrong with making law breakers face the law.

“Would such people rather the law be circumvented because the offender is their loyalist? What of the victim? As far as I’m concerned, there is nothing to jubilate about. It is a legal issue, so no amount of sentiment will change anything,” he submitted.