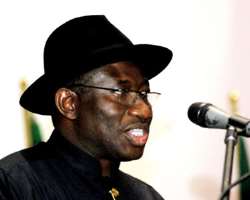 SAN FRANCISCO, July 25, (THEWILL) – As preparations for the 2015 general elections gather momentum, President Goodluck Jonathan has promised to do everything possible to prevent the excesses of politicians which are overheating the polity.

The President, gave the promise on Thursday in Abuja, while esponding to concerns expressed by a delegation of the Nigerian Bar Association (NBA) led by its president, Mr. Okey Wali, saying the rising political tension in the country was uncalled for.

“The political tension in the country is mainly built around the 2015 elections which should not be the case. It is quite disturbing. The year 2015 is still far off. I expect politicians to focus on the business of governance now.

We must do what we were elected to do first. We will do our best to curb the overheating of the polity,” President Jonathan told the delegation which included three former presidents of the NBA.

The President also said that he had asked for a detailed brief on the security situation in Rivers State and assured the delegation that all necessary action will be taken to ensure adherence to the rule of law in the state and the maintenance of law and order.

Jonathan, while addressing other issues raised by the delegation, said his administration was implementing the right policies, programmes and projects to accelerate economic development and boost employment in the country.

He therefore pleaded for a little more patience from Nigerians, saying the results of his administration’s efforts in areas such as power supply will become even more apparent in due course.

The President also assured the NBA that his administration will do all that it could towards the positive reformation and strengthening of Nigeria’s judicial system, including the resolution of issues related to increased funding for the judiciary.

He therefore reaffirmed his commitment to the progressive reformation of Nigeria’s electoral processes to guarantee that all votes cast in elections truly count and that elections in the country are accepted by all objective stakeholders as free, fair and credible.

While urging the NBA and other professional associations in the country to find ways of interacting with government on a regular basis, President Jonathan said the associations are established not to antagonise government, but to contribute to national growth and development.

He also accepted the NBA’s invitation to open the association’s Annual General Conference at Tinapa, Cross River State next month, promising to personally honour the invitation if his official schedule so permits.

In his address at the occasion, NBA President. Wali, conveyed the association’s views on the state of the national economy, national security, the rule of law, independence of the judiciary, the anti-corruption crusade, elections and the electoral process as well as the ongoing review of the 1999 Constitution.