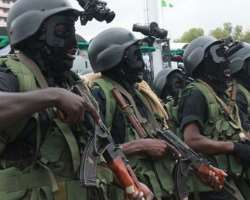 
Contrary to the mis-conception that the Federal Government of Nigeria is withdrawing its troops from the United Nations, UN, peace-keeping force in Mali because of pressing security challenges at home, Sunday Vanguard has authoritatively learnt that the action is a protest against the UN for naming a Rwandan army general as the force commander instead of a Nigerian officer.

The Rwandan is 50-year-old General Jean-Bosco Kazura and he has been appointed to command the Multidimensional Integrated Stabilization Mission in Mali (MINUSMA).

Nigeria's Major General Shehu Abdulkadir, who was the force commander of African-led International Support Mission in Mali (AFISMA) from inception in January 2013, was said to have come out tops in the interview for the appointment of the force commander but was sidelined, a source said.

This is the first time Nigeria would be unilaterally recalling its troops from any UN operations.

Nigeria is the fourth largest troop contributing country under the United Nations Peacekeeping Operations - and no Nigerian has had any appointment as force commander in any of the UN peace keeping missions.

'Kazura is to assume command on 1 July 2013' which is 'in accordance with the Security Council resolution 2100 of 25 April 2013,' Eduardo del Buey, deputy spokesperson for Mr. Ban Ki-moon, the Secretary Generay of UN, said at a briefing. The Council resolution stipulates that the 15-member body will review the transition of authority to Kazura and 'the transfer of authority is to take place from the African-led International Support Mission in Mali (AFISMA) to MINUSMA,' del Buey  added. In April, the UN Security Council approved the 12, 600-strong United Nations peacekeeping operation to take over in Mali on July 1 for an initial period of 12 months.

The main task of MINUSMA is to support the political process in Mali, in coordination with the African Union (AU) and the Economic Community of West African States (ECOWAS).

The UN currently has 15 peacekeeping operations and one special political mission - the United Nations Assistance Mission in Afghanistan (UNAMA).

Sunday Vanguard was told by a very dependable source privy to the goings-on, that Nigeria had, indeed, earlier sent a protest letter to Mr. Ban Ki-Moon, the Secretary General of the UN, when the idea was being mooted that General Kazura would lead the force.

The letter, it was learnt, expressed, in both strong and persuasive terms, the incongruity in appointing a Rwandan to lead a force that is preponderantly populated by Nigerian military personnel.

In fact, 'Nigeria had expected a favourable response from the Office of the Secretary General on the matter but going ahead with the appointment of the Rwandan suggests that the Sec. Gen. was not persuaded', the source said.

Of note, diplomatic sources said, is the fact that 'Kazura fought in the 1990s in the ranks of the Rwandan Patriotic Front (RPF), the rebellion led by now President Paul Kagame, who took power in Kigali in 1994 to end the genocide.

In 2010, he was briefly arrested for 'insubordination' after travelling without permission to South Africa to watch the football World Cup and he has over 24 years of national and international military experience, as well as command and staff experience. In February, Nigeria sent 1200 troops for AFISMA.  In terms of hardware contribution, the Nigeria Air Force deployed two Dassault-Breguet Dornier Alpha fighter jets and two Mi-35 Helicopters, the C-130 transport Hercules and the medium carrier, the G222, among others.