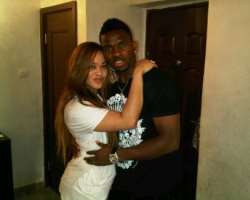 The marriage of Most Beautiful Girl in Nigeria 2008, Adaeze Igwe and Super Eagles captain Joseph Yobo is at the moment experiencing some turbulence, this your darling magazine National Enquirer can exclusively reveal. The love birds who got married in a hush manner, barely three months after meeting in December 2009 are said to be patching things so as not to caught the attention of the press and public in general.

According to impeccable sources close to the Yobos, the reason for the squabbles is highly connected to Adaeze's mother, Mrs. Abigail Igwe now Fashanu after she married the former Footballer turned business man in 2011.

Joseph Yobo and Adaeze's mum our grapevine revealed became sworn enemies when the Fernabarche of Turkey skipper got wind of her plans to crash his marriage.

It was reliably revealed that the woman who's married to her third husband with Adaeze and her younger sister from different men, allegedly controls the marriage to the extent of advising her daughter against getting pregnant for Yobo even after Joey, their son is almost three.

The reason she gave her daughter, we further learnt is because she needed to get back into her sexy shape just in case things no longer work out between her and her Plateau born hubby and might require her re-marrying.

She was also alleged to have instigated Adaeze's hush return to school barely a year after her marriage as the ex-model is presently furthering her studies in far away Santa Monica College, Los Angeles, USA, where she is reading Communication while her husband and son are in Turkey.

The goal hunter who used to play for Everton of England before making a switch to Turkish side Fernabarche also allegedly found out that Mrs. Fashanu could have a hand in Adaeze's frequent request of money for irrelevant things as she's said to have developed an unexplainable interest for frequent shopping.

The last straw that broke the camel's back, our source revealed was when Adaeze's mother's visit was becoming too frequent in the Yobo's Turkish home as she would storm their apartment unannounced and always interfere in every little argument that ensue between the growing couple.

This we learnt eventually led to her ban, as Yobo officially informed her to stop coming to their home as her interference is doing their marriage no good. Adaeze's mum was also not invited for Joey's 2nd birthday party which held in their home in Turkey and insiders dispensed that Adaeze has been asked to choose between her mum and her home as she's not needed in their home for now nor invited to any of their parties.