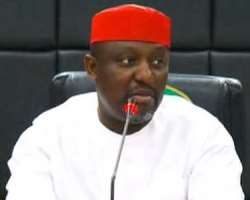 
Imo state governor, Owelle Rochas Okorocha has again warned contractors handling various projects in the state to adhere strictly to the specification of the job awarded to them to ensure delivery of quality work for the people of the state.

Okorocha who dropped this warning while inspecting some ongoing projects in some parts of the state, reiterated the commitment of his administration to transform the state by delivering quality jobs that would impact positively on the lives of the people.

The governor also called on the people of the state to join in monitoring ongoing projects and report any erring contractor to the government. He explained that the essence of constructing Orlu modern market, the governor said the essence of the shopping mall was to address the menace of street trading and further decongest the city for free traffic flow.

Similarly at Akokwa- Ideato road, the governor also pointed out that the road project when completely dualized and reconstructed would link Anambra with Imo and other neighboring states thereby boosting the economy of the state.

At Nwaorieubi market, Okorocha said the city is among the seven cities identified by the present administration towards making them modern cities, and however, called on Imolites and investors to partner with the state government in its dream to make Imo state one-city-state.