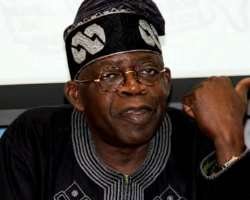 SAN FRANCISCO, July 04, (THEWILL) - The ruling Peoples Democratic Party (PDP) has accused the National Leader of opposition Action Congress of Nigeria (ACN), Asiwaju Bola Tinubu, of “carrying his despotism too far” by seeking to bar some persons from contesting the. Ekiti State governorship election in 2014.

PDP, in a statement by its Acting National Publicity Secretary, Barr. Tony Caesar Okeke, said it is extremely “wicked and undemocratic” for Tinubu to order a House of Representatives member from Ekiti State, Hon. Opeyemi Bamidele, to forget his governorship ambition, adding that such smacks of tyranny and outright disdain for democracy.

“By ordering a House of Representatives member from Ekiti State, Hon. Opeyemi Bamidele, to forget his governorship ambition in the 2014 governorship election, Tinubu has once again displayed his despotic tendencies and utter disdain for democratic process.

“This is extremely wicked and indeed the height of tyranny and outright disparagement for the people and their right to choose their leaders as guaranteed by the 1999 Constitution as amended,” the statement said.

Reminding the ACN National Leader that he is not from Ekiti State, and as such should not decide for the people, the PDP urged the people of the state “to rise up to the occasion and defend their rights by rejecting the usual practice of allowing god-fathers to select their leaders for them.

“In openly endorsing Ekiti State governor, Dr. Kayode Fayemi, for a second term and ordering Hon. Opeyemi to forget his ambition, Tinubu has clearly shown his resolve to truncate laid down electoral processes so as to retain the system through which the resources of the state are being diverted to private purses,” the party said.

Noting that the ACN has shown that it is not ready to respect the rights of the people, PDP urged all lovers of democracy to come over to the “national party where no individual sits in his room and decides who will be candidate for an election.”