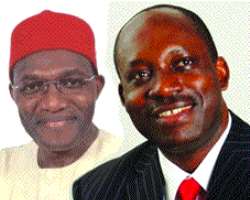 For Chief Andy Uba and Professor Charles Soludo the outcome of the last governorship election in Anambra is of great consequence. Both men contested the February 6, 2010 governorship in the State. While one contested on the platform of Labour Party(LP), the other was the standard bearer of the Peoples Democratic Party (PDP).

The two governorship candidates pushed their ambition with vim, vigour and desire for the office. Not a few believed that both men showed desperation in the quest for the Anambra governorship seat.

But in spite of the desperation for power, the dream of both men fell flat on their faces in the just concluded Anambra State governorship election.

On the surface, the outcome of the February 6, 2010 governorship contest is seen as a victory for Governor Peter Obi and his crisis ridden All Progressive Grand Alliance (APGA) against the fragmented Anambra State chapter of the PDP. But beneath, it was actually a personal loss for Uba, who was the special Assistant to former President Olusegun Obasanjo on Domestic Affairs, and Soludo who was governor of the Central Bank of Nigeria(CBN) until May last year.

The Aguata brothers were not the only losers of the election. There were actually 22 other contestants who participated in the election that saw the incumbent governor retaining his seat.

But for Uba and Soludo, the issue goes beyond losing an election. The election result has utterly altered their political ambition in the state.

Andy Uba
Andy Uba contested the April 19, 2007 governorship election in Anambra State, and was declared winner of the election by the Independent National Electoral Commission (INEC). On the strength of that, he was sworn in as the governor of Anambra State. But barely sixteen days after, the Supreme Court sacked him. The apex court, in a landmark judgment had ruled that the election that brought Uba to office was a nullity as the governorship seat was not vacant at the time the said election was held.

Jolted by the judgment of the Court, the 16 days governor vacated Government House, Awka. Not one to be dainted, he headed to the Court, hoping to benefit from the magnanimity of the court like Obi.

First, he went to the Supreme Court, where he prayed the learned Justices to reverse the verdict. When he failed. He went to the Appeal Court, Enugu division, where the appellate court granted his prayers and set aside the judgment of the Governorship Election Petition Tribunal, which threw out the entire petition that arose from the April 19 governorship poll in Anambra. The tribunal acted on the strength of the Supreme Court Judgment of June 14, 2007, which declared the election, a nullity.

Enamored by the reprieve from the Appeal Court, the former presidential aide returned to the Supreme Court, asking to be declared governor- in waiting, so that he can return to Government House on March 17, 2010 when Obi would have completed his term. For the second time, the Apex Court turned down his request. Undaunted, he filed another case before the Appeal Court in Enugu asking the Court to make a declaratory order, that he is governor-in-waiting and should naturally succeed the incumbent governor. But on November 14, 2009, the court finally sank his governor -in-waiting dream.

After exhausting all legal avenues open to him in his quest to govern Anambra on the basis of the nullified election of April 9, 2007, Uba mounted the soap box again as a participant in the February 6 poll. Having tried unsuccessfully to fly the flag of the PDP in the election, he defected to the Labour Party, on which platform he contested the election.

For three weeks, the LP governorship standard bearer transversed the length and breadth of the state, seeking to get the nod of the electorate for the office, he so much coveted. Everywhere, he went, he appealed to the people to vote for him as he claimed they did in 2007. But at the end of the tension soaked election, for the second time his dream was dashed, as he came fourth position in the elections. Charles Chukwuma Soludo.

When the primaries of the party ran into troubled waters, the party's top hierarchy chose the former CBN governor as its candidate for the Anambra poll . Albeit in very controversial circumstances.

But the other aspirants who felt cheated by Soludo's emergence challenged his candidature in the Court. Informed party sources said the other aspirants believed that the former CBN helmsman was the brain behind the Court order procured by one Probity Adibe , which scuttled the gubernatorial primaries of his party last October, hence the decision to stop him from flying the party's flag in the election.

Consequently, at the time the former lecturer turned politician should have be en campaigning, he was running from one court to the other seeking to clear every hurdle to his candidature. Eventually, he got the nod of the court. With that judgment, the PDP gubernatorial candidate saw light at the end of the tunnel. For him, he it was only a matter of time before he would become ' his Excellency, the governor of Anambra State.' He was so sure of sweeping the polls. In one of his campaign outing, he was reported to have boasted to the people of the state that he would win the election in a landslide.

But on the d-day, the distant light he saw at the beginning of the election, turned out to be a mirage. He lost the same election he had hoped to win very convincingly.

Implications
For Uba and Soludo the outcome of the February 6, election has put paid to the governorship dreams. Already, both have congratulated Obi, an indication that they may not be contesting election results in the court.

Apart from having lost the opportunity to direct the affairs of the state for the next four years and reaping the attendant political and economic mileage that go along with it, both men may have equally lost their foothold in the politics of the state.

For Uba, having tried unsuccessfully to be governor for two consecutive times, it is unlikely if he would still want to try again. This is against the backdrop of the colossal resources, he has committed into the project.